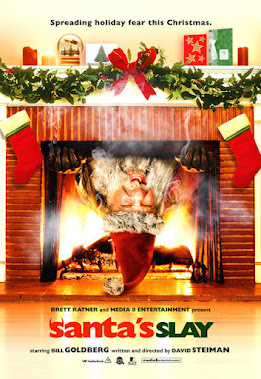 So, I had often heard about this 2005 black horror comedy, Santa's Slay. To date this this the one and only film helmed by David Steiman. I wasn't planning on reviewing this but, I decided it might be fun seeing how I just bought the DVD. Therefore, this review is going to be a little shorter and more informal. 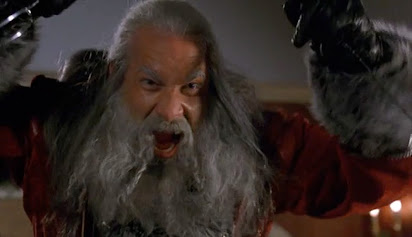 Probably what I knew about this movie going in, before actually seeing this is, of course the casting of WWE wrestler Bill Goldberg as a hulking evil Santa. Not to mention the cold opening-which I will get into more later. My first impressions is, Santa's Slay is the kind of horror holiday outing that you will enjoy if you also like Jack Frost (1997). Both movies are a nice balance of high camp and of course don't take the premise at all seriously. Having said that, I have to admit that the set up it far more interesting than just a killer Santa on the loose. As I said this movie is a pitch black comedy and again, this is where this movie really you can really compare this to Jack Frost. As you might expect from a movie from 2005 there is a lot cringe-worthy jokes that have aged horribly. And the humor ranges from legit funny to eye rolling. Overall though, the movie has its share of issues but I think the saving grace is a highly engaging narrative and its so absurd and cartoonish that its hard not to enjoy it. Not to mention this might have one of thee best cold openings I've seen in awhile.

Bad, but really fun and I think well worth a watch.