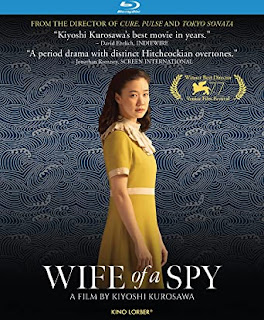 Disclaimer: Kino Lorber has provided me with a copy of this film free of charge for the purposes of review. All opinions contained within are my own honest reflections.
Wife of a Spy (2021) is the latest feature film from director Kiyoshi Kurosawa (Pulse, Cure). I will say that this movie is probably not going to do it for casual film watchers. Indeed, the movie is slow paced and requires the viewer’s utmost attention. Kurosawa does throw a lot of information and characters at you, and it does feel like a chore in keeping up with the narrative. Having said that, there is a lot to admire about Wife of a Spy. The story, whilst needlessly complex, it does capture a WWII landscape rife with paranoia, betrayal and on a larger scale duty to the ones you love vs. to one’s own country. Taking this a step further, the overall theme of the movie is what you’re willing to do for the supposed greater good and what the cost of that is. Though maybe heavy handed, I think it’s an interesting and wholly necessary through line given the material. It does feature some nice Hitchcock-like flourishes and some tense moments.


On a technical level, Kurosawa as always provides a laser-focused attention to detail that is at times staggering. First time DP Tatsunosuke Sasaki gives the movie a really big scope and feel that captures a certain kind of melancholia. The use of natural lighting is quite striking and further helps give Wife of a Spy its beautiful and at times ethereal look. Production designer Norifumi Ataka (Cure, Shutter) and costume designer Haruki Koketsu (Alice in Borderland) further helps give this period film a great deal of life and authenticity.


Wife of a Spy is a convoluted melodrama that maybe could have leaned more on the thriller aspect. Still, it’s a harrowing, well-crafted and interesting movie from a master filmmaker.

Picture: Wife of a Spy is a visually interesting film and I am happy to report that the 1080p looks incredibly nice. The film has a nice crisp look and though the films palate is on the muted side colors do pop. There is a really excellent warmth to this transfer that feels in line with the films haunting tone. There is even a slightly grainy film like quality which was a nice surprise.

Sound: Wife of a Spy has a DTS 2.0 and 5.1 track. The latter showcases a nice big bold sound which helps give the more intense moments impact and depth. Dialogue comes through nicely as does the score and sound design.

Extras: Extras include: The Making of Wife of a Spy (53mins)