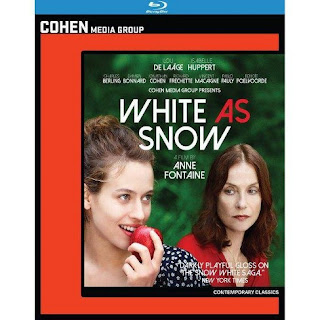 Anna Fontaine director of Coco Before Chanel (2009) comes a new take on the classic Snow White fairytale. A young woman named Claire ( Lou de Laage) flews from her abusive step mother only to find more problems in this modern re-telling. So, frankly speaking, White as Snow as a concept is more engaging than sadly Fontaine actually delivers in terms of a final product. There are many modern updates to the story of Snow White ranging from brilliant to dreadful. I think White as Snow falls somewhat in the middle leaning more towards the latter. I think the biggest issue here is at nearly two hours long the movie feels bloated. What we get is a at times aimless and pointless exercise in excess without any compelling driving force to back it up.
On the plus side you have DP Yves Angelo's rich photography that helps at least keep the movie lovely looking. Bruno Coulais composer of classics like Coraline (2009) provides a playful and moody score. I really wanted to enjoy this movie but outside of the great acting, photography and score, the story itself isn't that engaging much as it tries.
Picture: White as Snow for all its narrative issues is a stunning looking movie. And, I am happy to report that the 1080p transfer really showcases this. The overall image looks crisp and clean and locales, costumes and sets have a vivid nicely balanced look to them. Indoor scenes have a nice moody and warm look which fits the films tone. Outdoor scenes really impress.
Sound: White as Snow features a DTS 5.1 track. Dialogue comes through nicely and the 5.1 is quite impressive and packs a nice punch-especially for a less action driven film.
Extras: Trailer
Posted by The Video Attic at 11:28 AM