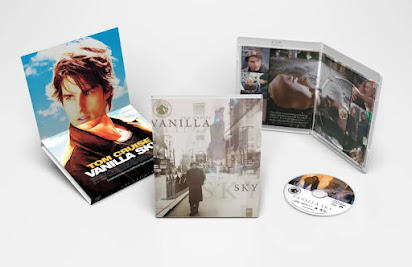 Disclaimer: Paramount Pictures has provided me with a copy of this film free of charge for the purposes of review. All opinions contained within are my own honest reflections.
Nashville HERE
Mommie Dearest HERE
48 Hrs.  HERE
Another 48 Hrs. HERE
Last Train from Gun Hill HERE
Vanilla Sky (2001) turns twenty years old an to celebrate Paramount Presents is re-releasing this on Blu Ray. I recall not joining the bandwagon of critics that panned the film. However, I wanted to give it a fresh watch and see if I still disliked it or if, seeing how my taste has changed and matured, helped me to appreciate it. Sky tells of a rich playboy named David (Tom Cruise) who literally floats through life, using women and not taking anything very seriously. After a serious accident leaves him disfigured things in his life sways from surreal to nightmarish.
I have to say after re-watching this film and letting some of the harsh criticism die down -I think this is a pretty brilliant and wholly unexpected film. Cameron Crowe all but helped cement rom-com tropes that in a way looking back is a bit cringe. Vanilla Sky seems to be an almost meta-self commentary on his previous work. Its this context that I totally lacked when this first came out but to give myself some credit I was only 16 when this first came out. After seeing it as a "mature" film lover its mind blowing that Crowe dips his toe into Lynch-ian nightmare logic. Crowe also liters the movie with layers and self contained easter eggs and foreshadow that makes repeat watches a real treat.
Vanilla Sky is a good movie once you fully remove it from how polarizing it was to critics at the time. In fact, I recall it being a punching bag for sitcoms like Family Guy. But, I think if you haven't seen it and were turned off by the latter-give it a chance. Its actually a really engaging and interesting film.
Picture: Once again, Paramount Pictures provides a stellar looking brand-new 4k transfer. Vanilla Sky utilizes at times some very bright at times high contrast lighting. This new transfer does a great job at handling this really vivid and at times harsh visual style. Colors are bold when they need to be and muted when called for. Clearly, this is a really thoughtful restoration and follows Crowe's vision. Skin tones have a fresh natural look to them and grain is smooth yet it retains that nice film quality look. Comparing this to screen shots of the previous release you can tell that this is brighter and indeed sharper in terms of overall clarity.
Sound: Vanilla Sky has a big bombastic DTS 5.1 track. This movie uses a lot of music both score and licensed and the boost in sound I think really utilizes this in a nice way. Range wise I noticed a nice amount of depth sound wise and dialogue and sound design coming through crystal clear.
Extras: For Cameron Crowe fans this disc is PACKED with features both new and ported over from the previous edition.  Included is:
NEW Filmmaker Focus: Cameron Crowe on Vanilla Sky (HD)
Audio Commentary by Cameron Crowe & Nancy Wilson
Alternate Ending with Optional Commentary by Cameron Crowe (HD)
Prelude to a Dream (SD)
Hitting It Hard (SD)
An Interview with Paul McCartney (SD)
Gag Reel (SD)
Music Video "Afrika Shox" by leftfield/afrika bambaataa (SD)
Photo Gallery with Audio Introduction by photographer Neal Preston (HD)
Mask Test with Optional Commentary by Cameron Crowe (HD)
Kurt Russell single take with Optional Commentary by Cameron Crowe (HD)
Trailers (SD)
Deleted Scenes with Optional Commentary by Cameron Crowe (HD)
Posted by The Video Attic at 7:16 AM