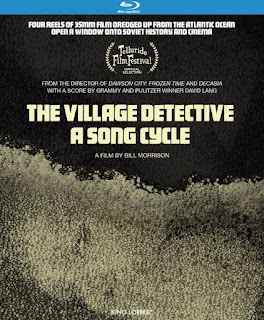 Lost films is probably the most heartbreaking aspects of being both a film fan and historian. Indeed, a large number of silent films are considered lost if not completely destroyed. This is due in part to several vault fires and just a general lack of care for film preservation. Thankfully though, films are being found all the time, in the strangest of places. Such is the case in The Village Detective A Song Cycle which sees film canisters that were caught in a fisherman's net. The following is a story of the actor who is featured in the recovered films.

I have to say that recently I started pushing myself to watch and review documentaries that were totally outside my wheelhouse. However, lost films and film restoration is certainly something I am very familiar with (but by no means an expect). Therefore I was actually really looking forward to this film. But...I dont think this is a very good documentary if I am being brutally honest. Morrison in my opinion doesn't do a good job at laying out a blue print for the main subject, Russian actor Mikhail Zharov. It starts out decent enough, giving some background on the actor but the film then just slogs with long acting reels without any interesting context weaved throughout. It feels like padding and the lack of historian commentary guiding the audience makes for a frustrating choir. The film which was recovered was not even lost -it had been archived and even shown on television. Even explaining the reels doesn't come until the films over. I think there is some interesting and engaging stuff but this is so over-stuffed with padding that you lose anything that might be impactful.

On the bright side the doc has a nice visual flare that I did quite like. It seems that Bill Morrison's previous films are short features and, I think that this feels like a short stretched to 80 minutes.

Picture/Sound: The Village Detective has a nice clean looking 1080p transfer. The interviews shot for this doc have a good clarity and field of depth. No grain that I could detect. Includes both a 2.0 and 5.1 track with dialogue coming through nicely.