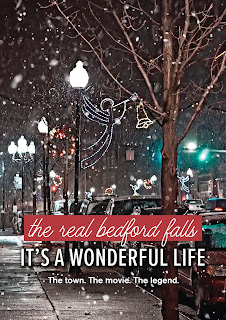 It may shock you to learn that, upon its original release, It's A Wonderful Life (1946) didn't even make back its budget of 3.18 million. Its hard to believe but, this classic was considered a flop for RKO Pictures. In fact, it wasn't until the movie started being re-shown on television that audiences re-discovered the film and it became popular. It is now considered a seasonal favorite and cemented itself among the best loved and remembered films from Hollywood's Golden Age. One of the things that has helped the movie stay so fondly remembered is the setting of the little fictional town of Bedford Falls. As pointed out in the documentary, the town itself is not only a character in the film but also a blank canvas of innocence and a yearning for a simpler time. But what if you could actually visit Bedford Falls?
While Frank Capra never publicly stated that Bedford Falls was based on any one real location, it is, heavily implied that this movie takes place in upstate New York.  One sleepy town makes the bold claim that may very well be the closet thing to the real Bedford Falls. That town is Seneca Falls. Told through the residents, its citizens and even actors from the film, Jimmy Hawkins and Karolyn Grimes (the Bailey children, the latter has the most iconic line from the film) this short documentary about the history and connect with an iconic and treasured classic of cinema.
As a film buff and a big fan of Its a Wonderful Life I thought this was a really interesting film that, at only thirty minutes long is a lean and to the point exploration of not only the little town of Seneca but also how there is some credibility to its claim to have at least been partly the inspiration for the legendary fictional town.  It's a breezy and very engaging film that should be considered a nice companion piece to the '46 classic.
Picture/Sound:  The Real Bedford Falls comes to Kino on 780p DVD. Typically with newer cameras even projects filmed in a lower-def and transferred over to 780p looks pretty good. Bedford Falls looks good but is a bit on the overly grainy side. Overall though, the image is clear and incredibly serviceable. The same goes with the sound by way of a DTS 2.0 track.
Extras: Trailer
Posted by The Video Attic at 7:28 AM