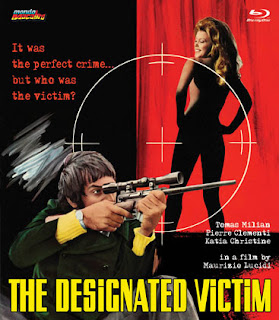 Mondo Macabro has rolled out three new sleazy, rare titles for genre fans this November. A playboy is caught in a loveless marriage and wanting to cash in on his wife's successful modeling career. He meets a carefree young man named Pierre Clementi (Pierre Clementi). They both want people in their lives dead and plot to swap murders. If this plot seems familiar it is because its the basic set up of Alfred Hitchcock's Strangers on a Train (1951). Sadly though, I have to say that this Italian "remake" doesn't really push boundaries.

Picture: The Designated Victim looks impressive on 1080p with a new 4k scan.  The colors have a nice refreshed and vibrant look to them. For an early '70s film I was impressed that this print is almost entirely free of noise and scratches. Outdoor locales look especially stunning. Grain is a bit on the heavy side but not to the point of being distracting. Overall, a really clean looking transfer.

Sound: The Designated Victim has a DTS 2.0 track. Audio is fairly nice with only a few moments of slight distortion. Dialogue comes through clear, as does the score and sound design.