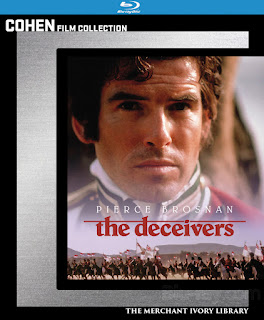 Disclaimer: Kino Lorber has provided me with a copy of this film free of charge for the purposes of review. All opinions contained within are my own honest reflections.
Outside of 2017's Call Me By Your Name, I haven't seen any Merchant Ivory films. And, I do like a good period drama which further sealed the deal on reviewing The Deceivers (1988).  Set in India in 1825, an officer named William Savage (Pierce Brosnan) goes undercover to unearth a strange cult that strangles men to death. Nicholas Meyers who had a short but impactful cinematic legacy with films like Star Trek II: The Wrath of Khan (1982), Time After Time (1979), and The Day After (1983) does a fine job here. Right away the movie starts out almost like a horror outing with a tense nighttime scene that establishes the danger and brutality at stake.
Meyers directs what is a really interesting film. The story unfolds at a nice pace and there is very little filler material. Like any good plot the stakes keep getting raised and is fulfilling enough to keep the audience engaged. So...yeah. I guess I need to address the elephant in the room. The main thrust of the plot centers around Brosnan's William to don face paint to pretend to be Indian. Cringe-worthy yes, and not to excuse this -only to say that the movie doesn't actually try to pass Pierce as a person of Indian heritage.
Even if you don't like period films I think this movie has enough interesting plotting and beautiful costumes and locales to make it feel like a tense yet breezy watch.
Picture: The Deceivers boosts a brand-new restoration from original film elements. I have to say that I was impressed by how colors in this thirty-plus year old truly pop. Lavish costumes really are showcased to their utmost beauty, as is the locales and production design. You can tell that darkly lit scenes have been brightened up considerably here as well. So, if you've only ever seen this on television or a VHS copy. I will say though, the grain level is pretty heavy at times. I noticed only a little bit of noise and artifacts but, overall this print looks pristine.
Sound: The Deceivers has a DTS 2.0 track. Kind of surprised this didn't have a 5.1 but, the dialogue, score and sound design comes through extremely well. Front heavy but is a nice clean audio transfer with no issues that I could detect.
Extras: Trailer
Posted by The Video Attic at 7:31 AM