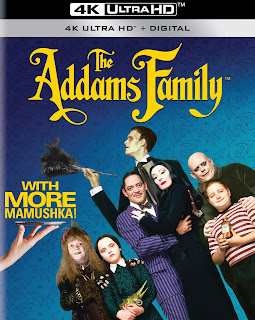 Disclaimer: Paramount Pictures has provided me with a copy of this film free of charge for the purposes of review. All opinions contained within are my own honest reflections.
Includes both original theatrical and Extended edition (2mins longer party scene)
In the '80s and '90's there was a slew of movies based on old television shows. The thought of course was these IP's had built in fan bases that would result in ticket sales. Some like 1987's Dragnet did poorly whilst others like The Brady Bunch (1995) and The Addams Family (1991) did extremely well. The latter is getting a brand-spanking new UHD edition. The long lost Uncle Fester (Christopher Lloyd) is reunited with the Addams family but things arent as they seem in this spooky, kooky and hilarious outing.
I have to say that, The Addams Family (1991) and its sequel, Addams Family Values (1993) are nearly perfect adaptations. From the laser-focus and wonderfully wry and sardonic  worldview of Barry Sonnenfield to the pitch perfect cast, Addams Family thrives where other small screen movie's fall short. I thing is, clearly the filmmakers went back to the original source i.e the Charles Addams cartoons but also blends a bit of the iconic '60s television version. It also helps that you have some much incredible talent both in front of and behind the camera. If I had to complain, this movie feels like a bit of an origin story for Fester-which is why I think the sequel doesn't have to work as hard.
Still, the overall film is highly detailed, incredible well photo and directed. And, of course is hilarious. If you've never seen this film-now is the perfect time.
Picture: I have to say that the previous Blu Ray of Addams Family was very solid but had room for improvement. So...the question is, does the UHD fix those issues? I have to say without a doubt, yes! It wouldn't surprise me if Sonnenfield had signed off on this transfer as it seems to perfectly fit the visual tone. Meaning, the movie is refreshed and clear with an incredible field of depth-details in the production design really stand out like never before. But: its not overly bright and retains that moody, spooky Charles Addams quality. Frankly: Its a stunning looking UHD transfer and its clear that a lot of time, thought and resources went into this. I am glad that this isn't overly bright and again, stays faithful to the visual palate.
Sound: Addams Family has  DTS 5.1 track. Again, like the visuals this sound track has a HUGE sound that is noticeable from the very first moments of the movie. This seems like the same track ported over from the 2019 re-release and is a very nice sounding robust presentation.
Extras: A HUGE Brand-new feature is Filmmaker Focus: Barry Sonnenfield talks about the Making of Addams Family. This Zoom interview is lively and candid with some nice behind the scenes photos and footage. I really enjoyed this interview and this makes a really great addition to this edition.
Also imports the previous archival featurette (7mins)
Posted by The Video Attic at 6:51 AM