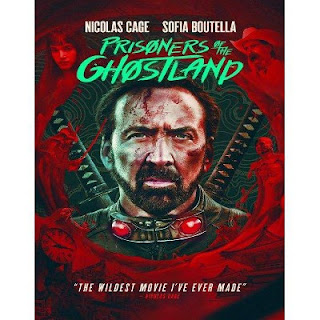 Disclaimer: RLJ Entertainment has provided me with a copy of this film free of charge for the purposes of review. All opinions contained within are my own honest reflections.
Other Reviews:
Batman Year One UHD HERE
Scream UHD HERE
Maniac Cop 2/3 UHD HERE

Plot Summary: PRISONERS OF THE GHOSTLAND is set in the treacherous frontier city of Samurai Town where a ruthless bank robber (Cage) is sprung from jail by wealthy warlord The Governor (Moseley), whose adopted granddaughter Bernice (Boutella) has gone missing. The Governor offers the prisoner his freedom in exchange for retrieving the runaway. Strapped into a leather suit that will self-destruct within three days, the bandit sets off on a journey to find the young woman—and his own path to redemption.

From outset, the movies of Sion Sono are, shall we say, a mixed bag for me personally. One thing I will say is, however I might feel about any given Sono project, he never plays it safe. Therefore, there is a certain kind of danger in his work that makes for excitement. Prisoners of the Ghostland is a film that very nearly is a masterpiece of gonzo madness but sadly falls short. There is a fine line between homage and a work that feels derivate. Prisoners of the Ghostland straddles that line hard. The entire setup is so close to John Carpenter’s Escape from New York that I am amazed that a lawsuit wasn’t filed. This in fact happened when Carpenter won a plagiarism case in Luc Besson’s Lockout from 2012.  Not to mention that this is very much an un-official remake of Mad Max. Clearly, Sono wears his influences on his gore-coated sleeves. Though, I will give the filmmaker a lot of credit for crafting a world that feels like a violent manga come vividly to life. Visually we the audience get treated to some incredible set pieces that feel haunting, harrowing and at times stunning.

I could forgive how this movie is basically different action and samurai films stitched together from the nightmares of children. However, the movie strangely takes itself far too seriously for the tone and the general over-the-top nature. It seems Sono is clearly wanting to have his earnest drama and eat the LSD-dosed cake too. I don’t think that this is impossible to pull off, but sadly, this movie doesn’t find the sweet spot between the two. Cage even quotes Hamlet at one point for good measure. Frankly, the movie is, for all its spectacle at times boring. It doesn’t stray far from the typical heroes’ journey but never flips the script in a way that feels new and exciting.

If Nicolas Cage was too subtle and nuanced for you in Pig (2021), fans of his wild performances will no doubt enjoy him in Ghostland. Though not the peak crazy that I’ve seen Cage, he certainly gnaws every bit of scenery he can. Though it’s Bill Moseley who somehow manages to out overact Cage in a performance that is so close to Chop Top in Texas Chainsaw Massacre Part 2 without wearing a plate on his head. Obviously, in any other movie this kind of over acting would be an issue. However, Sono crafts a cartoon world that fits Cage and Moseley’s wackiness.

On a base level Prisoners of the Ghostland is an enjoyable mashup film that will no doubt find a loyal cult following. Though, anyone outside of die-hard Cage fans may find this to be aimless and at times not a fresh enough take.

Picture:  Please note: this also comes in a UHD edition as well. I am reviewing the 1080p/Blu Ray edition. So, whatever I may think about Ghostland, I have to say the visuals are top notch. Its not a surprise that the transfer here looks really nice. The color saturations are handled extremely well here with outdoor scenes looking just breathtaking. This is no doubt due to some really nice HD cameras that seem to be more accessible to filmmakers. Sono really paints a vivid looking moody film and this is a really slick and clean looking visual presentation. Skin tones have a nice nature look. There is even an nice grainy film-like quality.

Sound: Ghostland has a really hearty DTS 5.1 track. This is an action heavy movie and its nice to have a track with some range and depth. Dialogue, score and sound design comes through nicely.

Extras: Extras include: Making of, Movie Still Gallery, Behind the Scenes Photo Gallery