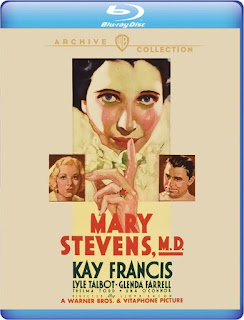 Disclaimer: Warner Archive has provided me with a copy of this film free of charge for the purposes of review. All opinions contained within are my own honest reflections.
Warner Archive rolls out another pre-code drama, Mary Stevens, M.D (1933) starring a at the time 28 year old Kay Francois. Francois sadly never made it as a big name in Hollywood despite appearing in over fifty films. Mary (Kay Francois) must overcome the stigma of being a woman doctor in this early '30s melodrama. I have to admit that I never even heard of this movie prior to this release. Mary Stevens is what you might call a B-movie which was made on the cheap without big name stars and big named directors. Still, this isn't to suggest these were bad movies just not as well known or outside of hardcore TCM fans.
Because the movie does have issues (which I will mention) but, I will say that a woman lead film about someone with a high status job was really progressive. And, while it certainly won't pass the Bechdel test it deserves some credit for showing women with some agency in their own story. It's a real shame that Kay Francois never became a huge star because she had a kind of grace and talent that could have taken her far if she got better/more well known roles. Lyle Talbot best remembered for the TV show Ozzie and Harriet and a part in Ed Wood Jr's infamous Glen or Glenda (1953). Talbot is a charming enough actor and does a lot with what he has to work with. Though its Glenda Farrell (Little Caesar) who manages to steal the show. Not to mention the iconic Una O'Conner is a small but memorable role.
I think Mary Stevens is what would later be called a soap-opera and sadly, I felt like it didn't have any really memorable moments that would make you wanna re-visit this one. It was no doubt groundbreaking for the time but nearly one-hundred years later the shock and gutsy aspects seem incredibly tame even baffling to a modern lens.  This movie is enjoyable not forgettable.
Picture: Mary Stevens is yet another top notch re-release by Warner Archive. The black-and-white photography has a crisp, clean and pristine look. As always the black-and-white hues are extremely well contrasted. What impresses the most is that grain is present but well maintained and at times is so minor its not even noticeable. What we are left with is a sharp incredible looking transfer.
Sound: Mary Stevens has a DTS 2.0 track. Slight background noise but overall a very clean hearty audio presentation. Dialogue comes through nicely.
Extras: Trailer
Posted by The Video Attic at 9:19 AM