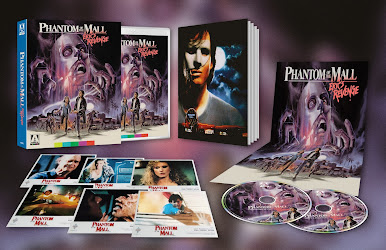 Disclaimer: Kino Studio Classics has provided me with a copy of this film free of charge for the purposes of review. All opinions contained within are my own honest reflections.
In 1909 French author Gaston Leroux published Le Fantôme de l'Opéra or, The Phantom of the Opera. Since, there has been many adaptations on radio, television and, of course, on the silver screen. The premise has proved riff for many different interpretations. In the '80s slasher films were all the rage and there was several Phantom films. The same year as Phantom of the Mall also saw The Phantom of the Opera (1989) starring Robert Englund. Eric (Derek Rydall) has his home set ablaze in order to make way for a new mall. The higher up's cover everything up but it turns out that Eric isnt dead. Now, he sets out for revenge but also, has time to re-connect with his girlfriend Melody (Kari Whitman).
On paper, a re-telling of The Phantom of the Opera set in a mall sounds like a pretty fun and interesting spring board. And, I will admit that the movie does have some clever nods to the source (Melody is a cheeky reference to the musical aspect of Phantom). Sadly though, the movie suffers from an underdeveloped screenplay, a tonal issue (something not uncommon for Friedman) and, I think it could have played up the camp aspects a bit more. Having said that, the movie is for the most part nicely paced and has enough kills to keep things interesting. Phantom is also just cheesy enough to make the short comings forgivable.
A lackluster but ultimately enjoyable late '80s horror flick.
Picture: Phantom of the Mall has been long OOP having a brief DVD release in 2006 and now is getting a 21st century upgrade on 1080p. Arrow doesn't disappoint when it comes to a nice picture transfer. The brightness of the picture has been dialed up which is helpful with some of the darkly light/night time scenes. The scenes in Eric's lair really seems to take advantage of this new restoration. Skins tones have a nice natural look and I was happy that there is a general refreshed look to the films color palate. Blacks have a nice depth as well. Grain is a bit on the heavy side and there is some minor blurring and and loss of definition. Nothing that I thought was distracting to the overall product.
Sound: All three cuts of Phantom of the Mall includes a uncompressed mono 2.0 track. Dialogue comes through quite well as does sound design and score. It seems like they had some good audio material to work with has the overall has a nice range and quality.
Extras:
Interesting note: Pauly Shore isnt included on this disc. I have no doubt Arrow had reached out to him.
Fans of Phantom of the Mall is be really happy that there are a slew of new extras: Included is: Two Audio Commentary tracks: Richard Friedman (Director solo track), Ewan Gant and Amanda Reyes. Audio interviews with Composer Stacey Widelitz and Assoicate Producer Robert J Koster
Shop Til' You Drop: The Making of Phantom of the Mall (42mins)
The Vandals Go to the Mall  (12mins) Interview with the punk band The Vandals who did the theme song.
Deleted/Alternate Scenes
Trailers: Domestic/International, Image Gallery
Disc Two (LE Bonus Disc)
The bonus disc includes the TV Cut of the film. It also includes a "Fan Cut" which features footage from TV cut and theatrical.
Posted by The Video Attic at 6:58 AM