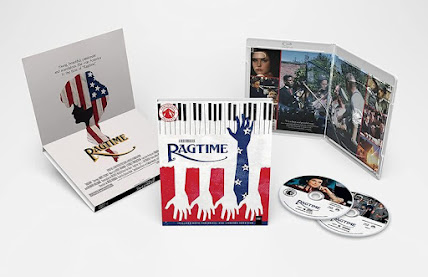 Disclaimer: Paramount Pictures  has provided me with a copy of this film free of charge for the purposes of review. All opinions contained within are my own honest reflections.

I have to say that I was really was excited when Paramount announced that they were re-releasing Milos Forman's 1981 film Ragtime. Back in 2018 I reached out to Forman's PR people but sadly, the legendary director was too ill for interviews-he would pass away that same year. I did however interview Robert Joy that year and he talked about working with him on this film. A young African American jazz singer gets caught up with a upper class family which intersects with historical goings in in early 1900's New York.

With an big scope and a keen eye for detail, Milos's Ragtime is a film that, strangely doesn't have a big following. At two-and-a-half hours long the movie really allows itself to take its time telling an epic story. The time time Oscar winning Milos who made such classics as Amadeus (1984) and One Flew Over a Cuckoo's Nest (1975) really weaves a rich tapestry of early 20th century America in a way that is engaging and also sets the stage of Milos's other period pieces. The story and how it touches on different aspects of two very different families -and how their story intersects is both interesting and highly compelling. There is an under current of the white savior trope that is a bit cringe-worthy which I think it worth a mention.

The cast is of course great with Elizabeth McGovern, Brad Dourif, Howard E. Rollins Jr, Robert Joy all giving the film their very all. Ragtime is the last theatrical film from the legendary James Cagney. It also features an early small role for Samuel L. Jackson

Ragtime is a fantastic sweeping epic with a fantastic cast and amazing cinematography by Miroslav Ondricek. Well worth seeking out.

Picture: Paramount Presents further impresses with their restorations. Here we are treated to a brand-new 4k scan from the original film elements. What fan films are treated to here is a pristine looking print free of noise and artifacts. Color contrast is well balanced with an overall sharpness. Grain is also very consistent and thankfully not heavy. Really not much if anything I can find lacking here, clearly this is great looking transfer of a forty-year old film.

Sound: Ragtime has a impressive DTS 5.1 track. Dialogue and music comes through nicely and the film has a lot of depth of field sound wise. Dialogued mostly front channel heavy.

Extras: Ragtime has some great extras both imported from the previous edition as well as new!