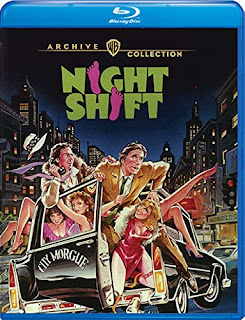 Night Shift (1982) marks Ron Howards second feature film (not counting television movies/shorts) which features a stellar cast. A meek morgue clerk Chuck (Henry Winkler) working the night shift is talked into becoming pimps by a smooth talking wild character named Bill (Michael Keaton). Meanwhile, Chuck falls for a working woman named Belinda (Shelley Long). Its interesting how even early on in his career Ron Howard had a instinct for material that capturing the pulse of what movie goers were interested in. He also knew how to spot talent and Night Shift features two future Oscar nominated screenwriters in Lowell Ganz (Splash, Parenthood) and Babaloo Mandel (A League of Their Own).

Night Shift thrives on a lean and funny premise that is nicely paced, lean and is simply written enough to give itself room to explore the madness. For the most part the comedy works nicely and the movie has heart that helps smooth over the cracks. Speaking of, some of the jokes do fall a bit flat. Also, this movie has some cringe-worthy jokes that make fun of eating disorders and leans in on some stereotypes. Henry Winkler reunites with his Happy Days co-star Ron Howard and adds a warmth and charisma that this movie needs. Michael Keaton is clearly having a wicked good time chewing up all the scenery. He's a lot of fun and, like Winkler adds something special to this outing. Shelley Long who was still riding high from the television series Cheers (1982-93) is gets somewhat lost among Winkler, Keaton and the supporting cast but is still solid. Also has a stellar supporting cast including Richard Belzer, Basil Hoffman and Pat Corley.

Night Shift is a really funny movie despite some wrinkles in its screenplay. Howard really shows he can handle comedy, drama and heart. A early '80s classic that is well worth a watch.

Picture: Once again Warner Archive has provided fans a really nice looking 1080p film. At nearly forty years old Night Shift is brought out of the morgue and given a fresh coat of paint. The overall color is nicely balanced, vivid looking but, doesn't look overtly processed or bright. I liked the warm look that entire film has which fits the tone. Skin tones have a really nice natural look and this 1080p transfer is free of scratches, noise and artifacts. Grain is smooth and not chunky. Another excellent job.

Sound: Night Shift has a nice DTS 2.0 track. Dialogue comes through extremely well as does the sound design and score.