Maniac Cop 2/3 UHD Reviews! Has Blue Underground Out Done Themselves? 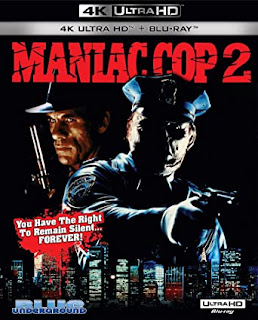 Please Note: I am reviewing these together however parts 2 and 3  are separate releases.
Disclaimer: Blue Underground  has provided me with a copy of this film free of charge for the purposes of review. All opinions contained within are my own honest reflections.
Maniac Cop 2 (1990)
Directed By: Bill Lustig
Starring: Robert Z'Dar, Robert Davi, Claudia Christian, Michael Lerner, Bruce Campbell
Picture: Maniac Cop 2 (minus the flashback to part one) starts at night and here we really get to see just how nice Blue Underground's UHD looks. The city is very much a key part of Lustig's work and here we get to see it in all its pristine, grimy glory. Indoor images have a nice warm look that is impressive in how detailed and refreshed the picture looks. Grain is ever so slightly present but for the most part has been smoothed, yet still has that nice film quality look. Blacks have nice deep look and colors are nicely balanced and consistent throughout. Small details like clothing textures really is quite amazing, especially for a movie thats over thirty-years old at this point. I didn't even really detect any blurring which can happen even in the best of transfers.  Blue Underground never ceases to impress me with how nicely they handle their UHD films.
Sound: Like all their UHD's Blue Underground has provided fans with a stellar Dolby Atmos track. This is a very action heavy movie so, it seems rather fitting we get a big robust sound
Extras: Disc 1)
Isolated Music Track, Trailer and Commentary with William Lustig and filmmaker Nicholas Winding Refn.
Disc 2) Blu Ray: Commentary with Bill Lustig and filmmaker Nicholas Winding Refn.
Back on the Beat: The Making of Maniac Cop 2, Cinefamily Q&A with director William Lustig, Deleted Scenes, Trailer, Poster/Still Gallery and Isolated Music Track. 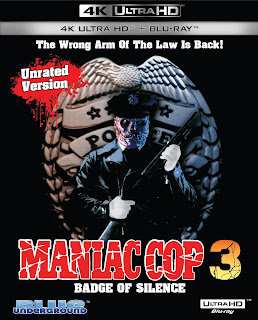 Maniac Cop 3 (1992)
Directed By: Bill Lustig
Starring: Robert Z'Dar, Robert Davi, Paul Gleason, Caitlin Dulany
Picture: Much like Maniac Cop 2, part 3 has a nice overall look to it. Seriously, this is a stellar looking restoration. The color balance is top notch and again, isn't flat nor is it overly processed. The darker lit/night scenes really showcase just how refreshed and detailed this new UHD scan is. I cannot overstate that this is a breath of fresh air for fans of the series.
Sound: Maniac Cop 3 has a Dolby Atmos track. Again, this action driven movie packs one hell a punch. The sound presentation has a lot of depth and in my opinion a nice 3D surround sound.
Extras: A New Feature for Maniac Cop 3 has a hilarious "Alan Smithee -which has most of you know-but if you don't. The Smithee name is pseudonym a director uses when he wants his name taken off a project. Basically, its William Lustig's commentary.  Lustig is joined by Joe Soisson. Joe was the producer and uncredited screenwriter and uncredited director. The two are incredibly candid and the track is incredible raw and entertaining as hell! A brilliant new feature.
Also ported over is: Wrong Arm of the Law: The Making of Maniac Cop 3, Deleted and Extended Scenes, Trailer and Poster/Still Gallery
Final Thoughts: The Maniac Cop series is probably not going to be for every horror fan and thats alright. I am a big fan of the grimy, Bill Lustig genre films. I think that yes, like a lot of films from the '80s and '90s things about them have maybe not aged that well. Despite this, I still enjoy these movies for the fun, shlock that they are. I'm not here to try and convert anyone to these films but only to say, if you like them, these new UHD releases are well worth owning. If you never have and always wanted to, I would say that this is the best time to upgrade if you have a UHD player and 4k TV. I personally have never owned these films previously but did enjoy renting them as a teen, so this was a hell of a fan nostalgic trip for me. Blue Underground has really been doing an excellent job with their HD and UHD titles and, Maniac Cop 2 and 3 may well have raised the bar.
Posted by The Video Attic at 7:35 AM