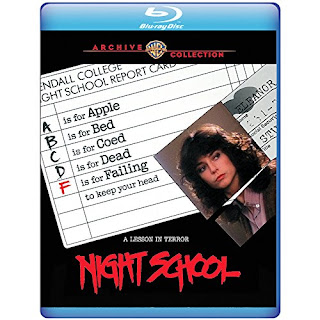 Fun Fact: Night School (1981) director Ken Hughes not only won a Primetime Emmy but was also nominated for a BAFTA and wrote the classic family film Chitty Chitty Bang Bang (1968) and directed the cult classic Casino Royale (1967) the latter not to be confused with the semi-recent Bond film (though the former is a Bond proof ironically). Needless to say, Hughes has had quite an interesting career with a wide range of genre fare. Night School is also notable for being one of the few slashers written by a woman, Ruth Avergon (in her one and only screen credit).

As the title suggests there is a killer attacking women at a local night school. All the women are beheaded in a grisly manner. Night School in its very first few minutes really establishes this relentlessly nihilism, featuring a gruesome death made all the more unnerving that it takes place in a children's play area.  Indeed, the murders in this film are vicious and nasty this side of a Fulci film. Frankly though, the movie tends to drag outside of a few morbid flourishes. This is pretty standard body-count fare that is well made but could have used more creativity. The dialogue ranges from silly to cringe worthy and just plain baffling. Seeing how Hughes was considered in his own right a respected writer so, I can't imagine why he wouldn't have helped shape the overall narrative. More than likely this was just a paycheck job for the at the time 60year old director. The at times jokey tonal shifts also don't help. I will say that there are some interesting concepts in the film including the killings have a ritualistic aspects. Also, I have to give the film a lot of credit for a pretty awesome killer reveal and finale is pretty satisfying.

Night School is probably something that only us hardcore 80s completists would want. However, despite its flaws I did some it enjoyable in a cheesy kind of way.

Picture: Night School was re-released in 2017 and for being an older release it looks really good. The overall brightness and color contrast is handled incredibly well. There is some maybe at times heavy grain but nothing that distracts. I have to say for a movie that is forty years old, this looks nice, especially with a slightly older restore.

Sound: Night School has a DTS 2.0 track. Like the transfer the sound is really robust. Dialogue comes through nicely as does the score and sound design.