It Came from the '80s: The House on Sorority Row (1982) MVD Classic Rewind Blu Ray Review 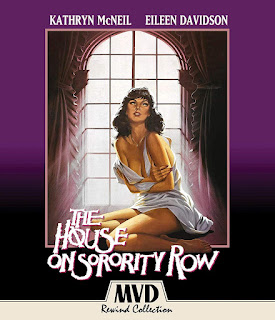 Disclaimer: MVD has provided me with a copy of this film free of charge for the purposes of review. All opinions contained within are my own honest reflections.

I am about to make a bold claim but: I think that The House on Sorority Row (1982) is among only a handful of '80s slashers that can truly claim to have some creepy to downright scary set pieces. A prank with a house mother goes horrible wrong, a group of young sorority women are stalked and killed one-by-one. Horrible buried secrets will be unearthed in this early '80s slasher. Clearly, Sorority Row is cashing in on recent hits like Friday the 13th (1980) but Mark Rosman crafts a movie with a interesting story, some decent twists and effective scares and gory kills. Some of this feels like it harkens back to the old dark house horror sub-genre and indeed, the movie features an almost Neo-Gothic vibe. It's a shame that, though the director has worked steadily since he feature debut  he never made another noteworthy movie in the horror genre.

Picture: From Blu-Ray.com MVD version of The House on Sorority Row is brighter and with less of a yellowish tone (Source Review HERE).  Row has a nice and refreshed look, especially when you compare it with previous home video releases. Colors really pop and the above mentioned brightness really helps with noticing details in costumes, sets and locales. Night scenes are really impressive with the clarity and overall brightness. It might have to do with how the film was shot and original elements but the film has a softness to it. Noise and some scratches are present as well. The latter helps enhance the Grindhouse film quality which I adore. A really damn nice looking presentation.

Sound: Row has a nice DTS 2.0 track. Dialogue comes through nicely. No audio drop out issues or unwanted background noise that I could detect.