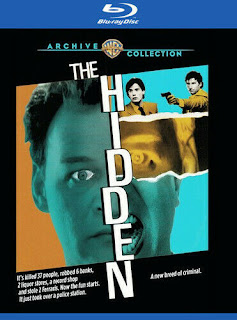 Disclaimer: Warner Archive has provided me with a copy of this film free of charge for the purposes of review. All opinions contained within are my own honest reflections.
Other Reviews:
Night School HERE
Maniac Cop 2/3 UHD Here
Deep Red UHD Here
Phantom of the Mall HERE
The Hidden was a late '80s sci-fi horror film that seems to be underrated and despite a loyal fanbase. It also stars cult icon Kyle MacLachlan. Its one I had often heard about but only really from hardcore film buffs like myself that enjoyed body horror. New Line, the house that Freddy built went out on a limb with this wild hybrid of body-horror and sci-fi. The Hidden as I said has, over the years, gained loyal cult following and after watching I can understand why. Jack Sholder (Elm St 2) takes a lot of cues from the body horror of Cronenberg mixed with an '80s police procedural all wrapped up in a big wonderful sci-fi bow.
Often high concept projects that fuses different genres frankly don't work. It takes a level of writing skill to balance and successfully marry these different genres into something that feels cohesive plot. And, you know what? I think that it works really well. Screenwriter Jim Kouf who would go on to write hits like Rush Hour (1998) and more recently Grimm series crafts an exciting, rich but not overly complex story. The film is extremely well shot. Jacques Haitkin the DP on Craven's A Nightmare on Elm Street (1984) and Wishmaster (1997) and he gives the entire thing a nice mood and tone.

Much like the name, I think The Hidden is still a movie that more genre fans need to check out. I love movies that are able to successfully stitch wildly different genres. Certainly, this is an 80s horror/sci-fi movie that deserves more love.

Picture: Re-released in 2017, The Hidden is certainly an incredibly refreshed looking 1080p scan. The image has an overall brighter and sharper look. However, whilst a lot is cleaned up the movie still retains this kind of grimy, Grindhouse feel with some artifacts and noise present. I am honestly not mad that this movie isn't 100% ultra clean looking. I think its the best of both worlds where its a step up from its VHS and DVD counterparts but also stays true to what is no doubt Haitkins and Sholder's vision.

Sound: The Hidden has a DTS 2.0 track. Dialogue comes through nicely as the sound design and score. No audio drop out issues and has a hearty quality for a 2.0 track.