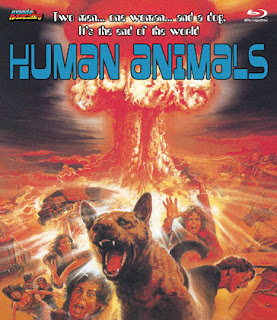 The '80s was a time when fear of nuclear fallout. This is of course reflected in the cinema of feels the US and aboard. Such is the case with  1983's Spanish film Human Animals. The plot is pretty simple: two men and a woman are seemingly the last people on earth after the bomb goes off.  I have to say that, Human Animals is a movie that I never even heard of until Mondo announced it for home video. This is basically a Adam Adam and Eve atomic style. The movie which features no conventional dialogue and the plot is pretty basic, two men, a dog and a woman try to survive in the natural world after its population has been wiped out. On the one hand Eligio Herrero's film feels like a slightly pretentious message on nuclear war but, thankfully, it never gets preachy. Instead its just a backdrop for lots of sex and taboo subjects. Fair warning, this movie has some sexual violence and heavily implied inter species relations. They also skin a rabbit so if that bothers you-just be warned it does happen.

I have to say that even with a really simple narrative I couldn't help but be totally engaged for the most part.  Things do start to sag a bit after the hour mark and then thankfully picks up. You also cannot help but love the absurdity of everything. Like how the world is wiped out yet is still beautiful looking -hell, even the characters who live through an atomic blast still have pristine looking clothes.

Human Animals is certainly not your run-of-the-mill end of days atomic film but rather feels like a ultra pervy caveman movie. The issue is this movie can be super repetitive at times but, damned if I was engaged nonetheless.

Picture: Mondo once again impresses with its 1080p transfer. Colors are lush and vivid, especially showcasing the beautiful outdoor locales (which this movie is shot entirely). Skin tones have a nice nature look to them. I was really floored by how the grain levels as well as the color tempt is well maintained throughout. Clearly, the original film elements must have been well taken care of as there is really no artifacts or noise even. If you have seen this film previously in imports or bootlegs I think you will be really blown away by the incredibly looking transfer here. Really top notch work.

Sound: Human Animals has a DTS 2.0 track. Though no dialogue as such, the score, sound design and grunts, groans and moans come through with a nice level of clarity and heartiness. Front channel heavy but more than does the trick.