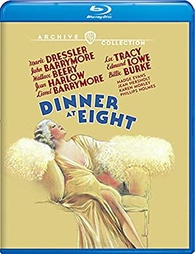 During the Great Depression audiences wanted escapism that came in the form of fantastical genre outings like the Universal horror pictures but, also high society melodramas. The latter is where filmmakers like Ernest Lubitsch and George Cukor excelled. Co-written by famed screenwriter Herman J. Mankiewicz Dinner at Eight examines the upper class lives of various dinner guests who intersects at the titular hour. Drama, heartbreak and betrayal is the main course in this classic '30s era outing.

Cukor is among the greatest filmmakers of the Golden Age of Hollywood and beyond. Already established as a go-to-director, who was only in his 30s at the time crafts a totally well oiled machine of a film that is nicely paced, extremely well photographed. William H. Daniels (The Shop Around the Corner, The Naked City) gives the movie a polish and style that is deserving of a Cukor production. As mentioned above Mankiewicz adds wit and life to Dinner at Eight. Also giving the movie its heart is Frances Marion.  It's also worth noting that this movie was a rare woman writing credit for two-time Oscar winner Frances Marion. Marion has such incredible credits as The Champ (1931) and The Big House (1930).

John Barrymore, Lionel Barrymore, Marie Dressler, Bill Burke, Wallace Beery and the saucy and exciting Jean Harlow head up a cast that is stuff of legends. Everyone is at the very tip top of their game and its a marvel how so many big personalities can be juggled. Its a further testament to Cukor's skill to be able to get everybody on the exact same page.

Picture: Dinner at Eight has never looked better on home video-I can go out on a limb and make that statement. As always Warner Archive takes a lot of tender loving care with their films. The nearly one-hundred year old movie has been scrubbed cleaned of any scratches, dirt and artifacts. Black-and-white photography is balanced extremely well and has a sharp definition which is darn impressive. Grain is present but not overly heavy or chunky. There is some slight blurring in a few scenes but nothing that is distracting-or even that noticeable unless your looking for it. Overall, another stellar looking presentation and well worth the upgrade if you have this on VHS or DVD.

Sound: Dinner at Eight has a DTS 2.0 track. Older movies sometimes have issues with unwanted background hiss or noise-thankfully this is not that case here. Dialogue comes through nicely.

Extras: Extras include the documentary Harlow: The Blonde Bombshell (47mins) This 1993 feature hosted by Sharon Stone is a interesting and informative overview of the life and career of Jean Harlow.