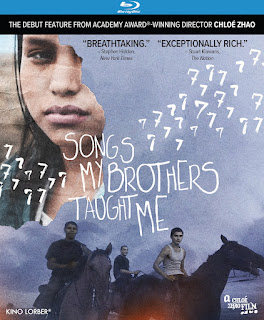 Disclaimer: Kino Lorber has provided me with a copy of this film free of charge for the purposes of review. All opinions contained within are my own honest reflections.
Chloe Zhao made Hollywood history becoming the first Asian woman to be nominated for and win the Oscar for Best Director, as well as first person of color to win in that category for Nomadland (2020). Songs My Brother Taught Me (2015) marks the feature film debut of Zhao. Johnny (John Reddy) and his sister Lisa (Irene Bedard) must face a tough living situation on the Pine Ridge Reservation with a brother in jail and a father who recently passed away. Its rare when you see such a startlingly, refreshing and nearly perfect feature film debut. Zhao directs this movie with the skill and professionalism of a seasoned veteran. Clearly, this is someone who was destined for greatness and, indeed, she ended up winning two-Oscars on only her third feature.
Chloe tells a somber and heartbreaking story in a way that feels incredibly real and grounded. It taps into a culture and way of life that is so rarely seen with this kind of polish and raw honesty.  The performances also feel very real and I wonder if a lot of the lines were ad-libbed. Helping to further bring this to life is DP Joshua James Richards. Richards and Zhao really use the camera in what feels very much like a documentary style with intimate subjective shots and use of natural lighting. Indeed, this use of the natural very much fits into the overarching theme of the movie, which is living and trying to tame a seemingly untamable world. The landscapes and shot compositions are breathtaking and at times staggering.
Songs My Brother Taught Me is a very bold, moving film that truly ushered in a creative voice.
Picture: I mentioned how visually stunning this movie is, with its use of incredible landscapes and gritty documentary style subjective-camera work. I am happy to report that the film looks fantastic on 1080p. Shot on digital the movie has a sharp and refined look and again, it supports this docu-style that they filmmakers were going for.  Colors are vivid and the color contrast feels warm and alive.
Sound: Songs has a DTS 5.1 track. The dialogue, score and sound design comes through nice and clear. This isn't a action heavy movie though when they do have some intense moments like an explosion the extra boost in sound is well utilized with depth.
Extras: Extras for Songs includes: Bloopers, Deleted Scenes, Interview with Director Chloe Zhao and trailer.
Posted by The Video Attic at 7:53 AM