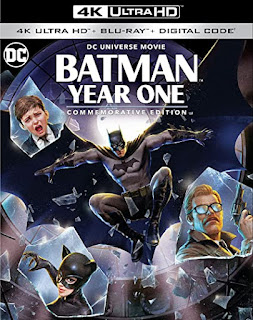 To say that Frank Miller's Batman: Year One published in 1987 was groundbreaking is a bit of an understatement. It remains as one of the best loved stories in the Batman cannon. Ten years ago Warner Animation brought the famous graphic novel to incredible life. I have to admit even being a huge Batman fan I never actually seen the DCAU adaptation. This seems like a fitting time especially with this making its US UHD premier.
As the title suggests, Batman Year One tells the story of the origins of Batman, Jim Gordon etc. Much like the recent amazing The Long Halloween part 1,2, Year One stays really faithful to Miller's tome whilst also streamlining some elements to make it better fit the medium. And, seeing how this is a lean 64 minutes long the pacing is fantastic. The animation is as always really nicely done and, again, like Long Halloween it stays within the WB house style whilst still retaining the gritty style of the graphic novel.  This also has a excellent voice cast including Bryan Cranston, Ben McKenzie, Jon Polito and Eliza Dushku.
I am really glad I finally got to see this really top notch DC animated movie.
Picture: Once again, Warner Bros provides a nice clean looking transfer. The movie is only ten years old but comparing screen shots from the previous HD edition, its plain to see that this is a brighter and more sharply defined. Again, it really showcases the skilled and highly detailed animation style of these DC movies. Darkly lit scenes really impress here.
Sound:  Batman: Year One has a DTS 5.1 track. I have to say that the 5.1 track really does pack a big punch. Dialogue is mostly front channel heavy but the action scenes have a good bit of depth of field and range.
Extras: Ported over including: Reinventing Gordon, commentary by Alan Burnett, Heart of Vengence, DC Showcase Short: Catwoman
Posted by The Video Attic at 7:47 AM