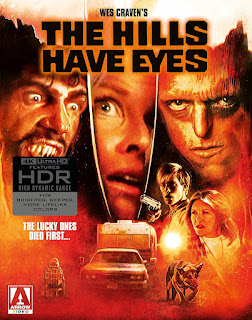 Disclaimer: Arrow Video  has provided me with a copy of this film free of charge for the purposes of review. All opinions contained within are my own honest reflections.

Wes Craven had always been someone that took risks in films (especially early on in his career). The Last House on the Left for example is a brutal and eye opening look at counter-culture, family and how violence has desensitized us after seeing images of Nam broadcasted on the nightly news. The Hills Have Eyes which came out five years after Last House also examines family (a theme in many of Cravens films) while also acting like a meditation on Vietnam and America's lust for blood gore in our entertainment.

So, I have to say that I think the remake of Hills is a better made film in not only polish (Craven still was a bit rough around the edges) and, also I think that the remake takes the themes and uses them more effectively. Still, I do give the movie a lot of props for taking the blue print of Texas Chainsaw Massacre and really doing something that is totally different. Also, much like Last House the movie aims to shock and feels at times dangerous and unforgiving. The families attack at the trailer still holds up as a jarring and nasty bit of '70s cinema.

The Hills Have Eyes is certainly not Craven's best films, it I think an important '70s horror film which spawned a sequel and countless knock off films.

Picture: Possibly due to original film material not being the best, Hills Have Eyes is a good but at times flawed looking UHD release. I think the first thing you notice is that the grain level is incredibly high here. It's at times where the image is overwhelmed by it at times. Color tempts at times tend to flux and there is at times a light black lines that roll a crossed the screen. I noticed that some of the artifacts have been cleaned up but there still moments when noise and dirt pop up. Its not all bad and I think the movie does have colors that pop and the outdoor locales truly look stunning. Brightness levels look good overall, and a well balanced color contrast. I hate to bag on this transfer, especially seeing how last months Deep Red (1975) UHD frankly set a high bar for excellent transfers. I dont at all fault Arrow (especially given their amazing track record). As I stated above I think that this is probably the best they could have done with what they were working with. Certainly, I think this is a step up from the 1080p version.

Sound: The Hills Have Eyes has a DTS 5.1 uncompressed sound track. The audio seems exactly the same as the 2018 release. Dialogue comes through strongly with some depth of field rather than just a front heavy sound experience. No Dolby Atmos track but I think it packs a nice punch nonetheless.

Extras: Sadly, Hills Have Eyes doesn't include any new features. Ported over from the 2018 release is:

The Desert Sessions – an interview with composer Don Peake