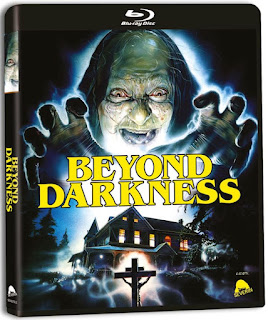 Disclaimer: Severin Films has provided me with a copy of this film free of charge for the purposes of review. All opinions contained within are my own honest reflections.
Claudio Fragasso is the mad genius behind many strange genre outings, most infamously Troll 2 (1990). Not only is Beyond Darkness released the same year as Troll 2 but it also stars Michael Paul Stephenson. Beyond Darkness tells of a minister and his family who move into a house haunted by a Satan worshiping woman who was released executed for killing and eating children. So, how to describe Beyond Darkness. If you ever wanted to see a lower-budget 1982's Poltergeist but wished it was bat-shit insane. In a way Beyond Darkness has shades of Troll 2 in that you have a typical American family (as filtered through Fragasso's interesting lens) moving into a strange place and crazy shit goes down.
Whatever you may think about Fragasso in terms of directing and writing, you cannot deny that the man rarely if ever produced something that was safe and dull. Beyond Darkness's first 30 minutes has more atmosphere and weirdness than most people have in their entire films. And you know I have to say for all its awkward plotting and um..interesting at times dialogue I was engaged and totally entertained time. It also has some really cool set pieces that again give this movie a nice Gothic mood and tone.
Part The Exorcist, part Poltergeist all completely raving mad. A cheesy, bloody good time.
Picture: Severin once again does a pretty excellent job with this film transfer. The overall film has really nice vibrant look to it. I was most impressed by not only how vivid the colors were but how the film is completely free of noise or artifacts. There is a ever so slight blurring at times but nothing that is very noticeable unless you are really looking for it. Severin really does a fantastic job and Beyond Darkness looks impressive especially for a movie thats over thirty years old at this point.
Sound: Beyond Darkness equally impresses with a nice hearty DTS 2.0 track. Dialogue score and sound design comes through nicely and though its front channel it packs a nice punch in my opinion.
Extras: Severin as always does a nice job at providing fans with some fun supplements. Included is: Beyond Possession Interview with Claudio Fragasso.
The Devil in Mrs Drudi Interview with Rossella Drudi
Sign of the Cross Interview with actor David Brandon
Also includes trailer and bonus CD soundtrack
Posted by The Video Attic at 9:18 AM