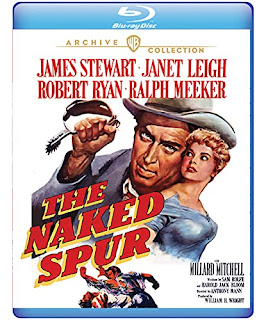 The Naked Spur (1953) is a movie that I often heard about, and seemed right up my alley, given I am a big fan of Mann's and of course this has a incredible cast. A bounty hunter named Howard (James Stewart) is tasked with being in a murderer named Ben (Robert Ryan) when he meets two unsavory characters in this classic '50s western.  Anthony Mann is sadly not a household name outside of my fellow film/TCM junkies, however, he has made some pretty great films like T-Men (1947), The Furies (1950) and The Glen Miller Story (1954).

Mann was no stranger to westerns and, I think he always added a great deal of depth in both the narrative and characters. The Naked Spur takes a pretty well worn bounty hunting western and deep dives into lose, paranoia and betrayal. The pacing is extremely well handled with enough rich narrative and some twists to keep you glued. Two time Oscar winning DP William Mellor (A Place in the Sun, Giant) gives the movie a breathtaking scope whilst composer Bronislau Kaper (Munity on the Bounty, Gaslight) provides it riveting score. James Stewart al always gives a complex and interesting performance and his natural likability further engages the audience.  Janet Leigh is also great and like Stewart dazzles with not much effort. Also features a great supporting cast including Robert Ryan, Ralph Meeker and Millard Mitchell.

Lean, mean and incredibly well directed, shot and acted, The Naked Spur is in my opinion among the finest '50s era westerns that came out of Hollywood.

Picture: The Naked Spur is another fantastic visual presentation. Right from the bright red opening credits, the colors truly pop here. This looks like a 4k scan (though I can't be sure- I could not find any info) and is crisp, clean and scrubbed of any artifacts or noise. There is a really nice level of clarity with things like the beautiful outdoor locales, costumes and skin tones. This movie frankly looks stunning and if you own this movie previously on VHS/DVD and you are a fan, you will most certainly want to upgrade.

Sound: The Naked Spur has a nice DTS 2.0 track. Score, dialogue and sound design come through incredibly well. It packs a nice little punch for a front heavy track.

Extras: Extras include the short Things We Can Do Without and a classic cartoon: Little Johnny Jet, as well as a trailer.