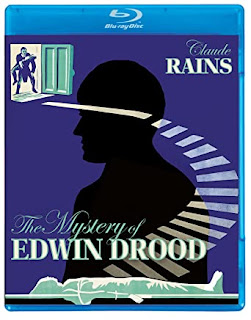 Based on the unfinished serial novel from Charles Dickens, the film tells of a addict named John Jasper (Claude Rains) who will stop at nothing to marry a young woman named Rosa (Heather Angel). The Mystery of Edwin Drood has been adapted in film and television as early as the 1900's and as recent as 2012. Since Dickens died before he could finish the series (and no plans to the ending was ever recovered) it allows each writer to come up with their own solution. Universal no doubt saw protentional in this film as it was over two-hundred thousand dollars and starred Claude Rains coming off the huge hit of The Invisible Man (1933).

The movie is interesting as its not really atmospheric and spooky enough to really be considered a Universal horror film- yet its more of a light mystery, costume drama with some slightly morbid flourishes and a mystery element. I have to say that I have never seen any adaptation of Edwin Drood so this was a real treat. Stuart Walker who directed the Werewolf of London (1935) gives this movie a lot of charm and flare. Its a shame that Walker died six years later because I think he has a interesting style that would have been interesting to seen being honed. As I mentioned, Universal gave this movie a decent budget and thus we get a pretty nice scope and scale and some very nicely done costumes. Claude Rains is, as always a wonderful actor and gives a commanding and delightfully sinister. David Manners gives a breezy and unencumbered performance and it probably his best of his short but impactful career.

I have to say this movie is engaging and it has some nice bitter ironies that almost feels darkly comic.

Picture: The Mystery of Edwin Drood is, like Blue Room a fairly nice transfers. There is a noticeably brighter and clearer sheen to this film presentation. Costumes, sets and locales have a more refreshed looked. Now, I will say that the movie is plagued with some issues. Mostly this comes from the scratches, noise and some artifacts. Considering this is a '30s era film a 2k scan probably was not possible either for budget or original elements that were available or maybe a combo of both.  Bottom line: Its a good transfer but isn't pristine, certainly I think its possibly the best its ever looked on home video.

Sound: Mystery of Edwin Drood has a DTS 2.0 track. Drood has a rather clear sounding audio track. Dialogue comes through nicely as does the score and sound design.

Extras: Historian and author David Del Valle as always treats film buffs to a lively and informative commentary track. Valle not only is extremely well researched but recounts actual meetings with Manner's late in his life. It's incredibly easy to get swept away by his charm and scholarly knowledge.