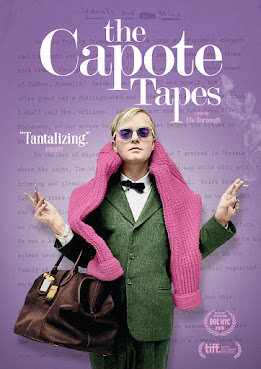 My Review for Truman & Tennessee: An Intimate Conversation HERE
Truman Capote is probably one of the most interesting and profound writers of the 20th century. Philip Seymour Hoffman won an Oscar playing in the 2005 movie Capote. But, I would say the more realistic movie on the writer (dealing his work on In Cold Blood) is 2006's Infamous. In my opinion Capote is the more stripped down Hollywoodized version of reality. Told in a series of taped interviews, new interviews and archival interviews the movie tells the story of Truman Capote. From his friends to his enemies the wild, strange and sassy writer is fleshed out, from beyond the page and into real life. It also talks about his infamous book Answered Prayers.
This is director Ebs Burnough feature film debut and is a really well constructed documentary. I will say that the movie is engaging. Its part bio-doc but it also is a snapshot at certain periods in Capotes career as well as his famous book about his close friends. My own complaint is that I think the movie could have used a stronger central core. Still, the movie is really enthralling with amazing interviews and countless hours of archival interviews that must have taken many hours to put together. So, yes the movie is engrossing and how could it not with someone so interesting as Capote.
A fascinating look at Capote the good, the bad and the ugly. Ebs does a good job at showcasing the many sides of this writer and its well worth checking out.
Picture/Sound: The Capote Tapes has a nice look on 720p. The movie is overly grainy but has a nice crisp clear look. Sound wise we get a nice robust DTS 5.1 track. Dialogue and music comes through
clean and extremely well.
Extras: Trailer
Posted by The Video Attic at 7:02 AM