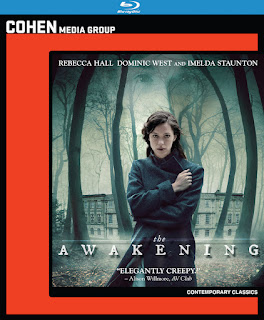 The year is 1921, the place England. Set in the background of the chaos of WWI a hoax-debunker named Florence (Rebecca Hall) is tasked with proving that a boys-boarding school isn't haunted. The children are frightened daily, with one recent pupil even dying recently. She sets up to find who the prankster is and of course gets more than what she bargained for. The Awakening (2011) is a movie that, shall we say a mixed bag. I think the biggest strength of this movie is its incredible visual style. Indeed, this movie is rife with old-school Gothic-literature style atmosphere and the overall movie has this ever increasing sense of dread and sadness. The movie really makes the most of its production values and lush, beautiful locales. It's also worth noting that the movie has some genuinely tense and harrowing moments.

Rebecca Hall (The Gift) gives a really good performance that has depth and nuance. Hall is one of those actors that is great at knowing how to not under sell or over sell a performance. Dominic West is equally as good and the two play well off one another. And, how can you not love Imelda Staunton of Harry Potter fame? Despite a really interesting and nicely paced first act the movie slowly starts to unravel. The mood and pulpy Gothic atmosphere is great but sadly I felt like the narrative suffers greatly. Frankly, the story lacks a lot in the second act and I felt dis-engaged. The finale is pretty out there and almost undermines any interesting things the movie had going for it.

I love that Awakening is steeped in "Old Dark House" style spookiness and Gothic splendor, however the narrative isn't as well developed as it could have been.

Picture: Shot in 2011 on what I can only assume was on a High-def digital camera. As mentioned in my review The Awakening is a visually stunning movie with a moody, with a somber color palate. This restoration seem to be in line with the atmosphere of the piece. The image is for the most part really sharp, especially with breathtaking outdoor locales. I will say that the movie has a lot of noise and grain. The problem is it seems to overwhelm the image. I took a screen shot to give you a better idea of what I'm talking about. This is something I don't really see too often with newer films. Its ashamed because I think in this case it does tend to be distracting at times. Beside this though, the image is crisp and thankfully there wasn't any blurring or lose of definition too much.

Sound: The Awakening has a nice DTS 5.1 track. The overall sound presentation is actually really nice here with a full bodied sound. This extra kick helps play with the films use of eerie and moody sound design and of subtle yet effective score. Dialogue comes through clearly as well.