SyFy Channel's Chucky Series Review. Is it Worth the Hype? 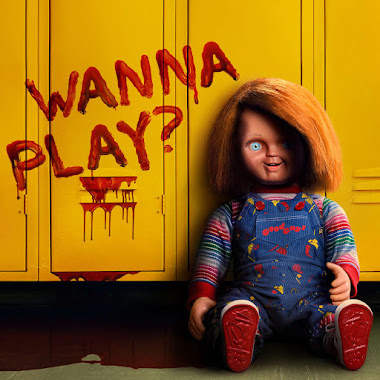 Disclaimer: SyFy/NBC/Universal provided me with a advanced digital copy for review purposes. All opinions reflected below my own.
The Childs Play series has been going through some interesting evolution in its life. First it started as a semi-serious horror series (with nods to how ridiculous the premise is) then, after part three it went into pure camp with Bride of Chucky (1998) and Seed of Chucky (2004). Even with being largely panned by critics, Seed made double its budget at the box office. Despite this the movie didn't exactly inspire a direct follow up and it would be a whooping nine-years before we would get the direct-to-video Curse of Chucky (2013). The movie barely made back its budget but it was hailed by fans and critics alike. More importantly, Curse gave the series the jolt it needed. This was followed by a less-good but still pretty fun sequel Cult of Chucky (2017). In 2019 the film got a big budget remake Childs Play (2019). The remake had thrown out everything from what I am going to refer to the legacy series (1-5, plus Curse/Cult) and was a new timeline. Fans were split on the remake but it did manage to make over $45 million on a 10 million budget. Like Curse of Chucky it was further proof that fans wanted more killer Good Guy mayhem in their lives. This is where the 2021 television series comes into play.
I was lucky enough to see the first four episodes (so this won't be an overview of the entire series) and I have to say that indeed, fans of the legacy series will be quite happy. Like the film series itself, Chucky masterfully balances the real world, campy and downright over-the-top on a gore stained razor's edge. The showrunners take the show seriously but thankfully, always has a swollen, bloody tongue firmly planted in its cheek. If you`ve never seen any of the legacy films you won't be lost as the show acts as a nice jumping off point with the series lore. Having said that, it does reward fans with lots of references and nods to the various sequels. It also provides more information on Charles Lee Ray which is actually really interesting and well 'executed'. It also is a treasure trove of references to other horror movies like Halloween (1978). So, die hard fans are going to want to pay close attention. 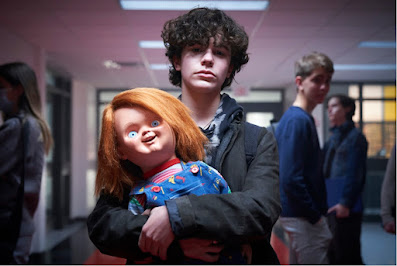 Without any spoilers I will just say that the show pays homage to the series deep rooted connection to the LGBTQIA community in a way that feels like the most refreshing thing in the horror genre to date. And for those upset by this- the Childs Play series has always been camp and had a big Queer following. Hell, Seed of Chucky includes a gender-fluid character AND includes John Waters (who if you are unfamiliar with-look him up). With all the praise I will say the teen-drama is a bit on the predictable side and feels like it bucks up against the fun parts with Chucky and the ensuing mayhem. Still, I didn't find this too annoying and thankfully the characters are a bit more developed than the typical CW outing.
I have to say I was very skeptical about a Childs Play series. But, the first four episodes thankfully shut down my fears. Clearly, Chucky is made with a love for not only the legacy film series but horror films in general.
Chucky premiers Oct 12th 10pm! Website HERE
Posted by The Video Attic at 10:09 AM