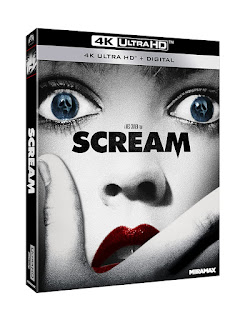 Please Note: It has been confirmed that this re-release is NOT the uncut edition.
Brief Review:
To say that 1996's Scream was a game changer is putting it mildly. Master of horror Wes Craven and a relatively newcomer Kevin Williamson took the slasher genre (which never truly died out completely) off of life support and ushered in a new wave of what I dub milleni-slashers (slashers from late '90s-00's). While this is far from the first meta-horror or even meta-slasher it's self-aware quality would often be copied but never quite as successfully. Its Craven's polish and pulse on the horror genre blended with Williamson's razor sharp wit and attention to detail that helped this movie thrive. To celebrate the films 25th anniversary and riding the hype surrounding the fifth installment, Paramount has re-released the film for the first film in UHD in the US.
Picture: Scream is a really beautiful looking movie which is something that seems to get lost in the discourse around this film. Mark Irwin who shot such classics as The Fly '86, The Blob '88 and New Nightmare (1994) etc really knows how to use the camera to ratchet up the tension but also give things a eerily stunning vibe. I'm happy to say that the Scream UHD really I think honors Irwin and Craven's vision color palate with vivid and vibrant colors that feel fresh but not overly processed or overtly bright. Its a great balance because this UHD transfer doesn't look lifeless and colors do pop. Grain is completely non-existent  and darkly lit scenes really showcase just how impressive this new transfer is. This is certainly a leap forward from the 1080p. Bar none I have to say this makes my list of must-own UHD releases of the year.
Sound: Just like the film transfer, Paramount has crushed it with this Dolby Atmos track. The pule pounding score and sound design is enhanced with a 3D-like sound. Seriously, watching this movie alone in the dark with a good surround system truly makes for a chilling, thrilling evening.
Extras:  Scream 25th edition has a new featurette A Bloody Legacy (7mins) This short retrospective talks to the cast of Scream (on the set of 2022 Scream film) as well as the new filmmakers of Scream aka Scream 5. It gets very heartfelt when the veteran cast talk about the late great Wes Craven
Also ports over audio commentary track with Wes Craven and Kevin Williamson. Also includes Production featurette, Behind the Scenes and Cast/Crew Q&A.
Posted by The Video Attic at 8:00 AM