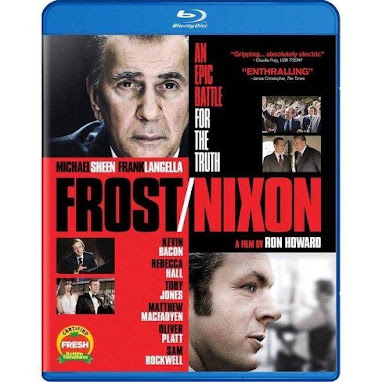 2008's Frost/Nixon is one of those films that I think people forget about despite holding a respectable 93% RT score with a 88% audience score. The plot summary (from the press release):In 1977, three years after the Watergate scandal that ended his presidency, Richard Nixon (Frank Langella) selects British TV personality David Frost (Michael Sheen) to conduct a one-on-one, exclusive interview. Though Nixon believes it will be easy to mislead Frost, and the latter's own team doubts that he can stand up to the former president, what actually unfolds is an unexpectedly candid and revealing interview before the court of public opinion.
Ron Howard actor turned multi-Oscar winning director helms this whip-smart film written by Peter Morgan (The Queen, The Crown series) on which this placed is based. Amazingly, the film is adaptation for the screen in a nearly effortless way, framing it in a faux-documentary style. It comes down to how do you make a series of ground-breaking interviews entertaining for the masses. Well, thanks to a incredibly well written script you get a sly cat-and-mouse game as well as some tense moments that have you totally engrossed. And, of course you have career high performances from Frank Langella. Michael Sheen , Rebecca Hall, Toby Jones, Oliver Platt and Sam Rockwell. In fact, its criminal Langella didn't win-but considering it was Daniel Day Lewis for the excellent There Will Be Blood (2008) I guess I can forgive this oversight.
Frost/Nixon is a movie that burned bright and faded just as quickly. But, hopefully with this re-release it will be re-discovered for a new audience.
Picture: Mill Creek has been up and down in terms of transfers. I believe that this is sourced from the original 2009 home video release. This might have been good for 2009 but is...just alright in today's age of higher def Blu Ray and Ultra HD. The image is no doubt crisp and clear but I couldn't help but notice how darker lit scenes comes off flat and a bit drab. Blurring also seems to be an issue here. On the plus side skin tones look overall natural and nice and the film does retain a lot of detail in sets, textures in costumes and clothing, sets, locales etc. Decent maybe for the time but is abit wanting in 2021.
Sound: Frost/Nixon has a DTS 5.1 track. This is a really nicely done track. An overall robust audio presentation with crisp dialogue, score and sound design.
Extras: The extras from the previous edition is ported over onto this re-release and includes:
Audio commentary with Ron Howard, and a series of featurettes including:
The Nixon Chronicles. Discovering Secrets, The Making of Frost/Nixon, The Real Interview, Deleted Scenes.
Posted by The Video Attic at 9:21 AM