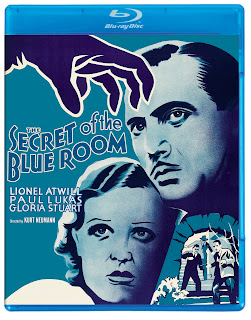 This fall Kino has released a handful of lesser-known Universal thrillers from their pre-Code era. One of these is 1933's The Secret of the Blue Room starring the OG scream queen Gloria Stuart. A group of suitors has gathered a mansion to usher in Irene's (Gloria Stuart) twenty-first birthday. It seems that the house has "the blue room" or ghost room in which mysterious deaths have taken place. In jest the men dare one another to take turns spending the night in the infamous bedroom in this pre-code thriller from Universal Studios. The Secret of the Blue Room is probably what you would consider a B-programmer, a movie that clocks in at typically about 60-70 minutes and was meant to be paired with another film for double features. This is where B-movie gets its meaning. Despite having some negative condensations, B-movies can certainly be fun, if not down right brilliant. For example the entire gritty, stylish noir movement came largely from hands-off B-pictures made on modest budgets.

The Secret of the Blue Room is certainly would fall into what's called an "old dark house" picture, which refers to the 1932 James Whale horror film The Old Dark House (which also starred Gloria Stuart). This basically means you have a limited locale (a spooky mansion) with a cast of people stuck in said locale (again typically a spooky mansion) and, usually a murder takes place which sets off a mystery. This is a lot like what is also called a cozy mystery. I have to say I really like films with this set up. While not nearly as bold and creepy as Whale's '32 film, Blue Room is a hoot. At a lean 65 minutes the pace is nearly break neck and the plot has a nice clever twists and misdirects to keep in engaging.

I was so pleasantly surprised by how, even for a lower budget outing Blue Room is well shot with heaps of atmosphere. Movies of this area tend to be stagey but DP Charles Stumar is quite expressive and inventive his camera. The legendary Vera West did the films costumes. Gloria Stuart is of course dazzling and, though she is severely underwritten she adds something truly special. Horror mainstay Lionel Atwill is always great and, like Stuart he adds a level of polish and pomp to the film. Paul Lukas and Edward Arnold are fantastic in supporting roles. As much as I enjoyed the movie I will say that whilst I was never bored with the narrative I feel like the mystery aspect could have been more developed.

While not the most memorable '30s thriller, Secret of the Blue Room is enjoyable and as an excellent cast.

Picture: The Secret of the Blue Room is a fine transfer with the consideration that the movie is nearly one-hundred years old. The film has an overall bright and clear presentation with sharp details in costumes, sets and locales. The black-and-white has a fairly nice depth and contrast but there is some room for improvement. So, its kind of a shame this didn't get a 2k scan but considering its age and what if any original film elements available this may not have been possible. Though I think the movie looks fine it does have noise and artifacts. Some blurring also keeps the movie from being as sharp as it could be. I believe that this is certainly a step up from the previous DVD version. Its not perfect but its a very serviceable transfer, especially considering its age.

Sound: Blue Room has a DTS 2.0 track. Like the picture transfer this is serviceable with dialogue and sound design coming through nice and strong. However, there are some slight crackle here and there but thankfully not a lot. No audio drop out, tin sounds or other issues detected.