Pre Code The Ladies They Talk About (1933) Making its US Blu Ray Debut This November!

Warner Archive to Release The Ladies They Talk About (1933) 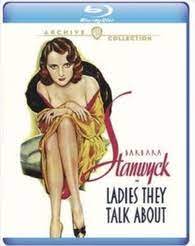 Fans of Pre-Code films will be happy that Warner Archive will be re-releasing Barbara Stanwyck's racy drama.

Synopsis: Gun moll Barbara Stanwyck is thrown into San Quentin thanks to her involvement in a bank robbery and the machinations of D.A./preacher David Slade (Preston Foster). It isn't political ambition that motivates Slade: he's in love with Stanwyck, and hopes that her incarceration will rehabilitate her. Instead, Stanwyck becomes a hard-bitten prison-block leader, spearheading a jailbreak. When things go awry, she holds Slade responsible. Upon her release, she goes gunning for Slade, and doesn't realize that she's really in love with him until she nearly puts him six feet under.

The Street Date is Currently November 30th 2021.
Plot/Date sourced from Blu-Ray.com HERE
Posted by The Video Attic at 1:08 PM