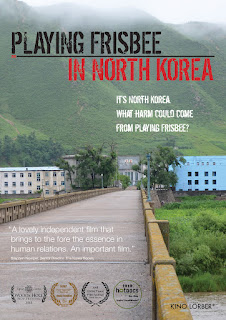 Disclaimer: Kino Lorber has provided me with a copy of this film free of charge for the purposes of review. All opinions contained within are my own honest reflections.
Other Documentary Reviews:
The Capote Tapes HERE
All the Streets Are Silent HERE
Whirlybird HERE

Typically, I enjoy learning about a subject that I know little to nothing about. North Korea and its politics are something I know only in very broad strokes. Playing Frisbee in North Korea follows a film crew that document the current state of the constrictive country.  Savanna Washington provides a really fascinating look into the goings on in North Korea. The most harrowing parts is of course what the film crew goes through, being threatened and not being allowed to film or indeed even have contact with outside citizens. Not only is this really jarring to see in action but I think it just further highlights just how tight of control the government has on the outside media and information getting out to the people. Washington also makes sure to not lose the human impact and the film takes a intimate

Even as someone who isn't that savvy with geo-politics Washington makes what I consider a pretty accessible and highly engaging documentary. The film also makes great use of archival footage as well as new interviews. It really paints a picture that is somber, harrowing and eye opening. If I had to complain I think that there are aspects of North Korea that could have been explored in greater detail. I also think they could have leaned in on the film crews experience more, which again, I thought was a really captivating aspect.

Playing Frisbee in North Korea might not be a documentary that everything is going to rush out and see. It certainly is a heavy watch. Though I think Savanna Washington provides a really thoughtful and engaging film that isnt dry and is worthwhile.

Picture/Sound: Playing Frisbee in North Korea looks fairly good on 720p. The new footage isn't as crisp and clean but, since this is a lower budget project the cameras are not super high def like some bigger docs are. Still, it overall looks good and does the trick. Frisbee has a DTS 2.0 track. Dialogue comes through nicely.