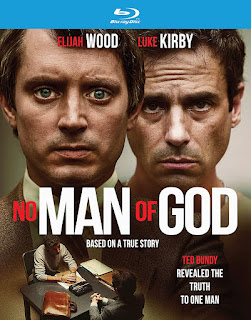 Disclaimer: RLJ Entertainment  has provided me with a copy of this film free of charge for the purposes of review. All opinions contained within are my own honest reflections.

Serial killers always have and always will hold a deep and lasting fascination with the public. In recent years there has been a big boom in true crime documentaries, non-fiction books and podcasts. In 2019 alone there were two features based on the ghastly deeds of Ted Bundy. The first was Netflix’s Conversations with a Killer: The Ted Bundy Tapes, an in-depth documentary featuring actual audio tapes with Bundy. The second was also a Netflix production, this time a docu-drama entitled Extremely Wicked, Shockingly Evil and Vile (the title comes from the now famous words of the lawyer in the Bundy case). It’s the latter that was much hyped, especially when it was announced that Zac Efron, a former Disney star, would be playing Bundy. Despite a stellar cast and being directed by the excellent Joe Berlinger (The Paradise Lost Trilogy), the movie was mostly panned by both critics and audiences alike. I mention this movie because I think Amber Sealey’s No Man of God is everything Wicked could have been had it been better conceived.

I will say right off the bat that this movie isn’t a big splashy exploitation film that languishes in Bundy’s gruesome crimes. In fact, we don’t see any of that on screen. By virtue of this fact, I am sure that this will lose some audience members. But I assure you, the movie is every bit as scary in a more psychologically engaging way. Sealey’s film takes a big swing in limited sets, and a bulk of the movie hinges on the perverse chemistry between Kirby’s Bundy and Wood’s Bill Hagmaier. This gamble pays off however as the scenes between killer and profiler are wholly engrossing and at times utterly spellbinding. I actually found myself gripping my chair as I was transfixed into the razor-sharp web that Bundy weaves. From a technical standpoint, Amber Sealey directs this movie with the maturity and confidence of someone who has three previous feature films and two shorts under her belt. Sealey has an eye for detail and gets at the heart of what makes Bundy a terrifying figure while not providing the viewer easy answers or cheap gross-out gore. The film has an icy cold color palate that further enhances the film’s expertly navigated tone. I also have to give a lot of credit to editor Patrick Nelson Barnes (The Wolf of Snow Hollow) for his outstanding work in making this movie flow incredibly well, and cinematographer Karina Silva (Titan), who does so much with her expressive camera without going overboard. Production designer Michael Fitzgerald (All We Had) really transports you into the mid ‘80s in a way that feels realistic.

Then of course we have the glue of this piece, the actors. Simply put, both Elijah Wood and Luke Kirby give what I can say with conviction are Oscar worthy performances. Luke Kirby, who won a Primetime Emmy in 2019 for his portrayal of Lenny Bruce in the television hit The Marvelously Mrs. Maisel (2017-), is equal parts charming and scary-as-hell as the notorious serial killer. Right off the bat it’s easy to sink into Kirby’s version of Ted Bundy because he looks so much like him that it’s downright eerie. The actor does a great job at finding the core of this monster and never under-or-over plays him. It’s a line that seems easy, but it can be tricky to find that sweet spot.

If there is any justice, this will further launch the actor into super-stardom. Elijah Wood, who not only stars in this film but is a co-producer, is equally as fantastic. Wood always brings something incredibly special whether it’s playing in huge tentpole films like The Lord of the Rings Trilogy or smaller indie outings. Wood plays the real-life FBI profiler, and though his role isn’t as showy as Kirby’s, he plays the role with the kind of skill that comes from someone who has been acting literally most of his entire life. I cannot overstate the kind of chemistry Wood and Kirby have with one another. In a smaller but equally good supporting role is Aleksa Palladino who is fantastic. It also features a little but really great role for Robert Patrick.

No Man of God isn’t bloody, and it isn’t aimed at a gore-hungry audience, but it still managed to creep me out whilst also gluing me to my seat. Luke Kirby and Elijah Wood give incredible turns in what feels like a modern The Silence of the Lambs (1991) crossed with Netflix’s Mindhunters (2017-)
Picture: No Man of God was likely shot on digital and I am happy to report that the movie has a film-like quality with some film-like grain. This is really nice and it helps give the movie a kind of retro-vibe that seems rather fitting with the time period. Images overall looks nice, colors pop and the image doesn't look dull or lifeless. I also could see that the transfer retains a certain level of sharpness.
Sound: No Man of God has a DTS 5.1 track. Dialogue, score and sound design has a nice level of depth and 3D, layered quality. RLJE always does a nice job at sound presentation that is hearty and full.
Extras: Extras include a Behind the Scenes Featurette.
.
My Review of No Man of God originally Posted for Geek Vibes Nation HERE
Posted by The Video Attic at 9:04 AM