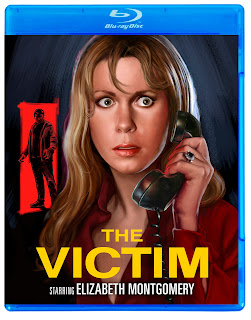 I have to say that I adore made-for-TV campy horror movies. From Dan Curtis's Trilogy of Terror (1975) to Don't Be Afraid of the Dark (1973)  each one offers a nice retro slice of terror. Kino Studio Classics has re-released three rare made-for-TV '70s horror outings including 1972's The Victim starring Bewitched actress Elizabeth Montgomery. A woman named Kate (Elizabeth Montgomery) ventures out in a storm to visit her sister only to realize she's not at home. A sinister mystery ensues. The Victim did quite well in the ratings and has earned a loyal cult following along the way. I will say from the outset: this movie is a slow burn that really demands attention and its all about the tension and mystery it weaves. Basically, its a big mood throughout.
The entire thing is visually really interesting with DP Michael P. Joyce. Joyce had worked on several Hitchcock films including Vertigo (1958) and North by Northwest (1959) as a camera loader. Joyce clearly takes a lot of Hitchcock cues and the film has inventive camera work, especially for a tv-movie. Elizabeth Montgomery does a fantastic job and her character has to carry the bulk of the piece. Indeed, this is Montgomery's showcase.  The iconic Eileen Heckart (The Bad Seed) of course shines in her small but impactful role.
The Victim is a movie that I discovered for this release and after watching it twice (once and then later with the commentary track) I can say that its a fun neo-gothic that demands your full attention and total engagement. You have to really get caught up in this sticky web of the suspense. The production design is really well done and a lot of talent in front of and behind the camera. Check it out, especially going into the spooky season!
Picture: The Victim was made almost fifty years ago and I have to say that this is a really stunning looking transfer. The colors pop and the image for the most part has a great deal of depth. Night time scenes really do show off how refreshed and vivid this new transfer boosts. I have to say I was incredibly impressed. The image color tempt is stable  and there is little to no noise or artifacts. There must have been some really nice elements as this looks crisp and clean throughout.
Sound: The Victim has a DTS 2.0 track. The dialogue comes through nicely and again, for a nearly fifty-year old TV-movie. Its obviously a front channel heavy but really does the trick.
Extras: Amanda Reyes author of the book Are You in The House Alone? A TV Movie Compendium 1964-1999. Reyes track is extremely well informed and lively. If I have one piece of constructive criticism its that Reye will explain some other TV-movies but gets heavily into spoilers so I found myself skipping ahead at times because I of course wanted to see those. Still, very nicely done throughout. Also includes Trailers
Posted by The Video Attic at 9:01 AM