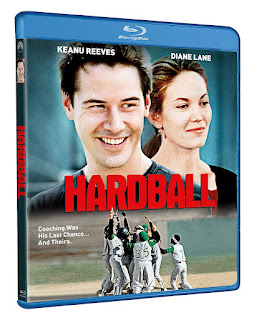 2001's Hardball is a movie that whilst turning a profit was considered a flop, and despite Reeves starring role never reached the kind of cult-classic status as say Johnny Mnemonic (1995) did. The movie also seemed to be over shadowed by the fact that it was released days after the Sept. 11 terror attacks. Most likely banking on the new Matrix movie hype, this 2001 Reeves lead film is getting its North American Blu Ray debut. I have to say I typically don't care for sports movies especially feel good ones with kids. Though, I will say an R-rated one did peak my interest. Connor O'Neil (Keanu Reeves) is a washed up nobody that has sports gambling debts. In order to make some under the table money he takes a job coaching a kids baseball team. At first he hates it but wouldn't you know it he starts to love it and the kids he coaches. He falls in love with a teacher Elizabeth Wilkes (Diane Lane).

So, I have to say that looking over Reeves post-The Matrix (1999) roles, he actually took some non-action, more character driven films. He no doubt had a slew of Matrix-like movies offered but instead he took films like The Watcher (2000) and The Gift (2000) and of course Hardball (2001). I have to say that it really gave me more respect for the actor who of course still did amazing action films but also mixed it up with other genre outings. I have to say that Hardball is formulaic, its sappy and predictable as hell. It also feels cringe-worthy when viewed as another white-savior narrative.  Having said that the movie serves its purpose of a feel-good movie with a R-rated edge. Tone wise the movie is strange as it feels a heartwarming The Sandlot meets something grittier like Menace II Society (1993). I don't think that this is a problem per say. In fact, I would say its probably one of the more interesting aspects of the film. You go in expecting a sappy-feel good movie and it is but a shocking reality is always lurking in the background, waiting to pounce. And, considering this director would go onto make Norbit (2007) and Meet Dave (2008) its not actually that badly directed. Reeves charm is in full effect and makes it worth price of admission. Diane Lane is good but her character is flatly written and doesn't have much impact on the story.

I have to say I thought Hardball was going to be a hard pass. However, despite its issues (and it has its share) I was never bored and engaged throughout. Reeves of course is always a win. *Insert cheesy sports metaphors here*. It never strays far from its clichés but it does do some things to subvert the "sappy feel good sports movie" genre.

Picture: Paramount has a pretty good track record at providing good clean transfers. Hardball doesn't look to be a new transfer and probably a upconvert from the DVD. This isn't to suggest this is a bad transfer and for the most part the image is vivid and sharp. Some images do look flat and not as refreshed as it could have been. There are a few moments of noise in the image but nothing that was overt or overly noticeable. Overall a nice HD debut but has some room for improvement.

Sound: Hardball cracks a home run with a nice DTS 5.1 track. The sound has a pretty healthy robust quality with what is in my opinion a full 3D effect at times.