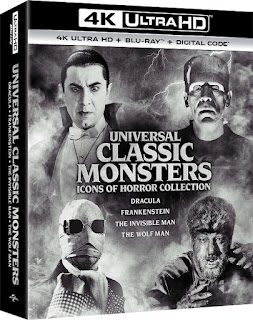 Disclaimer: Universal Studios  has provided me with a copy of this film free of charge for the purposes of review. All opinions contained within are my own honest reflections.

Please Note: Typically I do formal reviews along with these however these movies are so iconic and widely talked about that I am going to skip this and get right into the specs.

Picture: In prepping for this release I went back and watched the previous 2018 Blu Ray presentations of Dracula. My takeaway was for this edition-it was good but there was room for improvement. I noted that in the 2018 Blu Rays there was issues in certain scenes where the black-and-white image would flicker in tempt. and that there was some artifacts and noise. Dracula for whatever reason seemed to be the only Blu Ray presentation that had some pretty noticeable issues. BUT: You are probably wondering if the UHD version has improved these issues. Well, I am very happy to report that yes, indeed these issues have been corrected. The wear and tear has been digitally cleaned up. I honestly can say without hesitation that 1931's Dracula has never looked better. Universal really did an amazing job at taking the remaining imperfections from the previous edition and corrected them. The grain level is still on the high side but honestly that is to be expected, especially with a movie that is almost one-hundred years old. There are a few minor moments where the tempt does flux but this is VERY minor and as I mentioned a big improvement.

Sound: Like the visuals I would have to say the audio is a step up as well. You still get some unwanted background noise but no crackles or weak or drop out issues. Dialogue comes through quite strongly and the overall nice hearty presentation.

Picture: Unlike Dracula, I think Frankenstein already looked pretty good on the 2018 Blu Ray version. But it still had some issues. Some of the problems that plagued the Blu Ray version is pretty standard tempt fluxes (though not nearly as bad as in Dracula) and artifacts and noise present. Thankfully, these issues have been cleaned up. Some very minor noise is present but, again its so incredibly minor that it in no way is distracting. The black-and-white photography is, like the Blu Ray really nicely contrasted and sharp in  details in the set design, costumes and Jack Pierces legendary makeup is highlighted wonderfully. Grain is heavy but actually smoothed out and not chunky. Universal really put love into this restoration.

Sound: Frankenstein is presented in a DTS 2.0 track. The background noise is kept to almost unnoticeable levels here which I am very happy to report. Dialogue score and sound design also has a pretty nice healthy clarity. Overall, like Dracula its an improved version over the 2018 edition.

Picture: The Invisible Man was released a full two years after Dracula and Frankenstein. Hence you see a overall improvement in film quality. Invisible Man therefore looks pristine! Even grain is incredibly subtle and almost totally no-existent. Small details really leap out and I can honestly say this is a simply stunning looking restoration. Black-and-white photography is extremely well balanced. I can't find much wrong with this picture, its sharp, slick and probably the best this movie is likely to ever look-and I dont say that lightly. Another well done job!

Sound: Invisible Man has a DTS 2.0 track. Like the improvement in film quality you, its in what you don't hear that is impressive. This presentation doesn't have any crackling, or unwanted background noise. Therefore, the score, dialogue and sound design comes through quite nicely.

Picture: Like The Invisible Man, film quality had greatly improved since Dracula/Frankenstein in 1931. Released a decade later, The Wolf Man has always looked pretty good on HD. And, wow! The UHD version is simply put another stellar looking transfer. The image has a refreshed and sharp overall look with details in locales, sets costumes and of course the amazing werewolf makeup by Jack Pierce looking their utmost best. Grain is a bit on the heavy side at times but nothing that is at all distracting. Again, I sound like a broken record but I have to say that this transfer is quite pristine looking. The scenes drenched in fog-when Bela is attacked is really striking and thats saying something as I've seen this movie in various formats (VHS, DVD and Blu Ray).

Sound: The Wolf Man for me is probably the best sounding out of the four films. The DTS 2.0 is incredibly hearty, In fact, I actually found myself turning the volume down abit because the score, and dialogue comes through in such a strong way.

Extras: Extras include: Monster by Moonlight, The Wolf Man: From Ancient Curse to Modern Myth. Pure in Heart: The Life and Legacy of Lon Chaney Jr, He Who Made Monsters: The Life and Art of Jack Pierce, The Wolf Man Archives, Commentary by Tom Weaver, 100 Years of Universal: The Lot, Trailer Gallery 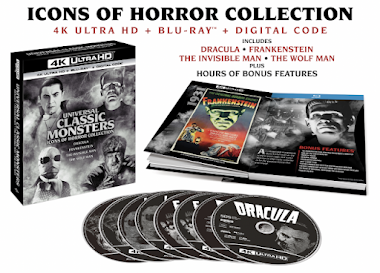 Final Thoughts: The Universal Monsters have made a HUGE impact on my cinematic life. As a outsider my heart bled for these "monsters". It's October and the perfect time to unearth some old friends. For those who already own the Blu Ray set, I can wholeheartedly say this is well worth upgrading if you have a UHD player/TV. I can honestly say that this is in my humble opinion, this is the best these movies have EVER looked to date on home video. I highly doubt it will look any better any time soon. If you only owned this movie on say DVD or VHS this is the perfect time to experience in movies in a higher def format.  Currently the movies are only a little over sixty-bucks on Amazon which seems steep but you get eight discs (4 UHD/4 Blu Ray) and tons of bonus features. Just based on my personal opinion I think that this is a really worth while set.
Posted by The Video Attic at 2:17 PM