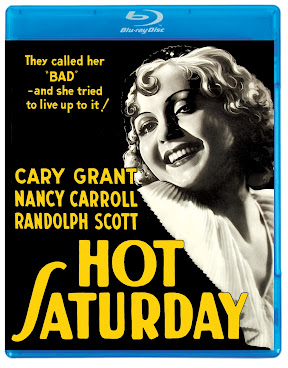 Other Pre-Code Reviews:
Devil and the Deep HERE
Supernatural HERE
Love Me Tonight HERE
The Sin of Nora Moran HERE
The Kiss Before the Mirror HERE
Doctor X HERE
She Done Him Wrong HERE

Hot Saturday (1932) is an interesting Pre-code movie as it examines how gossip can ruin a person's life. It doesn't seem like a mind blowing premise but I think its one that you didn't really see much in Hollywood films of the era. It delightfully thumbs its noses at the blue haired busy-bodies an it almost feels apt being a pre-code film talking about "moral panic" over nothing. Of course if there is any subtext about morals in cinema its buried between the lines. The film plays out like a mortality play but does still manage to sizzle and have some scandalous moments. For example a playful scene where a woman takes underwear off another woman would never have flown in the Hays enforced era.
Its worth talking about Grant in this movie. Even the most generous film scholars will tell you that early Cary Grant was rather awkward and not really the charming leading man that Hitchcock loved working with. Though, I think this came down to Grant having small bit parts with not much personality. Here however we get the Grant that classic film fans most remember. This is thanks to Oscar winning screenwriter Seton I. Miller who penned classics like The Adventure of Robin Hood (1938), Scarface (1932)  and 1941's Here Comes Mr. Jordan (which he won his Oscar for) crafts and tailor's Grants Romer as a smooth upper class loveable rouge. You could say that movies like Hot Saturday was in my opinion the blue print for future Grant personas. Nancy Carroll, who is probably best remembered for the pre-code James Whale film A Kiss Before the Mirror (my review for that can be found above) is also really good in this movie. In fact, I think its a shame she never became a bigger star.
Hot Saturday isn't what I would call the most deep movie, but it is well directed, well acted and I found engaging throughout its lean 73 minute runtime.
Picture: Hot Saturday I have to say is a damn impressive looking transfer. It looks like a 2k scan but I don't believe it is. Still for a movie that was made nearly 90+ years the movie has a nice look to it. The usual noise and artifacts are present (because come on its a movie that is nearly 100yrs old) but honestly this is kept to a minimum and I have to wonder if some good original film materials aided in this clean looking print. The black-and-white contrast is balanced extremely well and though grain is on the heavy side it does have a smoothed out quality.
Sound: Hot Saturday has a really nice DTS 2.0 track. Dialogue comes through nicely and doesn't have any unwanted background noise. Overall, like the picture, this is a clean presentation.
Extras: Hot Saturday has a nice commentary track from historian Lee Gambin. Gambin is, as always extremely well researched and very informative. Also includes a trailer.
Posted by The Video Attic at 6:29 AM