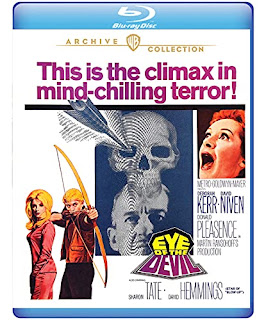 Director J.Lee Thompson has had one hell of an interesting career directing everything from The Guns of Navarone (for which he received an Oscar nom), the original Cape Fear (1962) as well as cult classics like Happy Birthday to Me (1981) and 10 to Midnight (1983) and so on. He also directed a interesting little horror movie called Eye of the Devil which is making its 1080p US debut. This is actually the second time watching this movie, having seen it a few years back (in Oct) on Turner Classic Movies. I was underwhelmed but curious to give it another shot.
I still think the movie is something of a mixed bag, however I think my second viewing helped me appreciate it a bit more. First off, I have to say this movie feels troupey but, when you consider this movie pre-dates both the book and the movie Rosemary's Baby (1968) but also The Wicker Man (1973). The latter involving a paranoid isolated community of religious zealots sacrificing in order to ensure a hearty crop is uncanny. Eye of the Devil also is interesting in that it features some very pro-active and interesting female characters. In fact, I would even say the women have the more complex roles.
The cast is also top notch with Kerr at her best. She is pretty much playing a similar character from The Innocents (1961), however she always brings a warmth and relatability. David Niven, Donald Pleasence and David Hemmings rounds of a excellent supporting cast.  This movie is also note worthy for being the first film of Sharon Tate. Given what actual happened to Tate, her being in a movie about a deadly cult gives the entire movie a creepy feeling. I also cannot over state just how beautiful this movie looks. Erwin Hillier uses a pulpy neo-Gothic look with German expressionist lighting and strange and calculating camera shots. The film really makes the most out of the atmosphere, haunting locales and sets.
My biggest issue with this film is the narrative that is interesting but fundamentally flawed.  I think that the filmmakers show their hand way too early. Its only 30 minutes until we know strange stuff is going down. Had the filmmakers toyed with the paranoia of what if anything is going on I believe the film would have been more tense and interesting. This is something where The Innocents  thrives. But, since from moment one we know crazy stuff is going on, the movie feels like there is no where to go.
Eye of the Devil is a stunning and chilling little film that is well made but lacks in a compelling narrative.
Picture: Once again, Warner Archive really does a stunning job with their restoration. I said in my review that this is a really great looking film. The film is totally free of noise, artifacts leaving a pristine looking transfer. Small details in sets, costumes and locales really stick out in the sharpness. As always, WA does a really fine job at providing a nicely balanced and contrasted black-and-white picture. Blacks are deep and great looking. I didn't even notice any soft/blurring which can sometimes happen even with the best of transfers.
Sound: Eye of the Devil also has a nice crisp DTS 2.0 track. Dialogue, score and sound design comes through nicely. A front heavy channel.
Extras: Trailer
Posted by The Video Attic at 9:36 AM