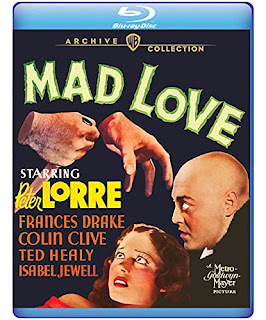 Before I get into this review I wanna say: I am a huge fan of 1935's bold and pretty weird Mad Love. I first discovered the film in the Legends of Horror Warner Bros. Collection released in 2006. It was a blind buy, but I loved exploring '30s and '40s era horror so it seemed like a safe bet. I am really glad I did because in that set was such gems as Doctor X (1932) and The Devil-Doll (1936). But, the movie in that set that I re-watched the most had to be Mad Love.
The story tells of a piano player named Stephen Orlac (Colin Clive) whose wife is a actor named Yvonne (Frances Drake) who stars in a local Grand G theater. Meanwhile, a wealthy doctor named Gogol (Peter Lorre) is obsessed with watching Yvonne in mock torture scenes. As fate would have it Stephen is traveling on a train along with a knife throwing murderer being transported for hanging. The train wrecks causing the pianists hands to become useless. In order to save his hands Yvonne talks the Doctor into re-attaching the hands of the recently beheaded knife thrower-insanity and murder ensues.
The legendary Oscar winning Karl Freund who acted as DP on such Dracula (1931), Metropolis (1927) and the entire run of I Love Lucy (1951-1955) directed only a handful of films including The Mummy (1932) and, his last job as director Mad Love. Freund being a visual man really presses upon the haunting atmosphere and Gregg Toland (whose credits include Citizen Kane (1941), Wuthering Heights (1946), The Grapes of Wrath (1940) just to name a few) gives the movie a huge scope and feel, pioneering shots like shooting high ceilings that would be a signature of Kane six years later.

Mad Love not only has moments that are deeply unsettling but a wry and sardonic sense of humor that feels like something Whale was injecting in his films at the time. This movie also has a fun nod to Karloff's The Mummy. This is also a very early film of a obsession with a actor/actress that turns toxic. I have to say, despite a cheesy title this is a really interesting and well made chiller.

Picture: As I said, I have seen this movie probably a dozen or more times over the years so I am very familiar with how the 2006 edition looks. Warner Archive truly smashes this restoration out of the water. Having been a fan seeing one of my favorite horror films look this pristine frankly moves me. WA is really great as scrubbing their films clean of noise, scratches and other flaws. Its incredible to think a movie that is nearly one-hundred yeas old looks this stunning. Toland's DP work is showcases beautifully with a nicely balanced and contrasted black-and-white image.

Sound: Mad Love had a fairly perfect 2.0 track. There is some slight unwanted background noise at times but overall its a hearty track. Dialogue, score and sound design comes through nicely.

Extras: Ported over from the DVD, Mad Love  has an excellent commentary by historian Steve Haberman. Haberman whose done many other tracks provides a lively, engaging and well researched exploration of this film.