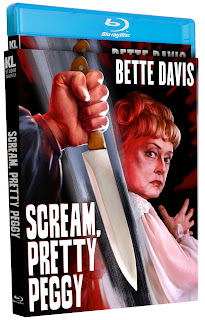 Kino Studio Classics has rolled out three-rare '70s made-for-tv horror movies and let me tell you, I AM HERE FOR IT. Scream, Pretty Peggy (1972) tells the story of a college student named Peggy (Sian Barbara Allen) looking for some part time work. She is hired to be a house keeper and later caregiver to Mrs. Elliot (Bette Davis) and her son Jeffery (Ted Bessell). But, of course things arent what they seem in this interesting little thriller.
I have to say that Scream, Pretty Peggy is a movie that was virtually unknown to me and now, it will certain make it into my yearly October watch list. Like most TV-movies this movie uses minimum locales and was shot quickly and on a budget. The movie however is well shot, and Gordon Hessler (Scream and Scream Again) does a lot with the made-for-TV limitations. Its worth nothing that the co-writer of this movie is the legendary Hammer scribe Jimmy Sangster. Sangster wrote classics like Curse of Frankenstein (19570 and Horror of Dracula (1958) among many others. Sangster crafts a neat little horror thriller that will keep you guessing until the finale. Clearly, the movie has the same kind of vibes as a later period Hammer with its neo-Gothic overtones with its modern creepy mansion and its carnival of bizarre art sculptures throughout. The Queen mother herself Bette Davis is of course the big draw, especially for us Queer horror fans. Davis doesn't ham quite like she did in Baby Jane it but her mere presence does give it a wonderful camp quality. Sian Barbara Allen has a strange quality to her and I think it helps enhances the movies off-balance vibes. Ted Bessell is good but honestly I feel is miscast.
Scream, Pretty Peggy delivers isn't scary but it does deliver some spooky fun that is perfect for October viewing. A must own in my opinion.
Picture: Scream, Pretty Peggy is yet another nice transfer from Kino. Colors truly pop here and, like The Victim, did not see much if any artifacts or noise within the print. It also impressed with how this scan showcases a great deal in depth and overall clarity. This is really stunning looking especially for a forty plus TV-movie.
Sound: Scream, Pretty Peggy has a nice DTS 2.0 track. Dialogue comes through nicely as does the moody score and sound design. Like the picture transfer I was impressed with the robust quality of the sound overall.
Extras: Scream, Pretty Peggy has a commentary by historians Troy Howarth and Nathaniel Thompson. A very enjoyable track and of course both historians are extremely engaging and well researched. Though calling a character a Social Justice Warrior a pejorative that the right uses was a bit Yikes.
Posted by The Video Attic at 11:24 AM