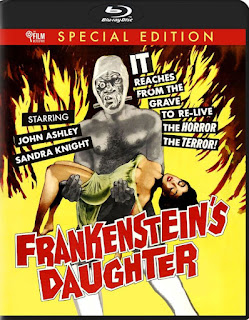 Disclaimer: The Film Detective has provided me with a copy of this film free of charge for the purposes of review. All opinions contained within are my own honest reflections.
Other Horror Titles:
Scream UHD HERE
Beyond Darkness HERE
Mad Love HERE
Coming just a year after the smash hit that was The Curse of Frankenstein (1957) from Britain's famed Hammer Studio, B-programmers were hot to cash in. Frankenstein's Daughter (1958) see's the infamous grandson of Frankenstein, Oliver Frankenstein (Donald Murphy) who just goes by Frank making monsters with the aid of an assistant. Meanwhile Frankenstein targets Trudy (Sandra Knight) the daughter of a scientist colleague.
Yeah...Frankenstein's Daughter is a pretty bad film. The writing sways from aimless to bafflingly brainless. However, I think the movie actually hits that sweet spot of  a so-bad-its-enjoyable. The outrageously bad makeup, the bad acting, editing and photography all make for a cheesy fun time.
Picture: Film Detective never ceases to amaze me when it comes to their film restorations. I actually would even go as far as to say they are almost up there with Warner Archive in terms of incredible home video transfers. Frankenstein's Daughter looks like maybe a 2 or 4k scan though I was unable to confirm this. The film looks refreshed with a nicely with the black-and-white photography well balanced and contrasted. There is a stunning field of depth and sharpness that allows for details in sets, costumes and locales to shine. Of course it also doesn't hide the bad makeup but, as I said in my review I think thats where the film finds its charm. Now, there are a little bit of noise but its so faint that you`d have to be actively looking for it (like this nit-picky reviewer) to spot it. Grain is for the most part not an issue at all. In fact, there was only maybe one or two scenes where it looked heavy (but again not distracting). Overall, this is really impressive.
Sound: Frankenstein's Daughter has a DTS 2.0 track. The dialogue, score and sound design comes through quite nicely here. No unwanted background hiss or audio drop outs to be had.
Extras: As always, The Film Detective provides a really nice array of extras. Included is: A commentary track by historian
Richard E. Cunha Filmmaker of the Unknown (36smin) A little backstory. Historian/author Tom Weaver wrote to Richard Cunha asking for an interview and sent off questions. What he got back to his surprise was a video taped interview with Cunha. This is that rare footage. The audio/video is spliced with archival footage. A stellar Bollyhoo presentation!
John Ashley: Man from the B's (10mins) A fun Bollyhoo produced featurette featuring excellent interviews with C. Courtney Joyner about John Ashley.  A really enjoyable supplement.
Posted by The Video Attic at 12:51 PM