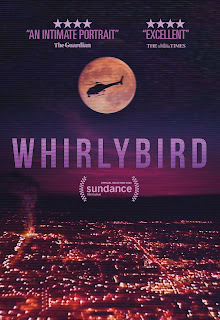 Whirlybird (2020) tells the story of a couple named Zoey (referred by his former name Bob) and Marika, their love affair telling hard hitting stories in LA from their helicopter. From the LA riots to the OJ Simpson coverage including the infamous slow-speed chase. Honestly, I was curious about this film (obviously enough to chose to review it). However, I have to say that I was a little skeptical if this would be a truly interesting story. Low and behold, it really is. Like any good documentary, filmmaker Matt Yoka makes this both about the big picture but also, knows when to make it a intimate portrait. And, I have to say its very easy to get caught up in the excitement and sometimes horror of the news stories but also, you can't help but get totally invested in Zoey and Marika and their story. It also touches on Zoey's gender conformation surgery which is yet another layer to this deeply person story. It also is partly a story about the city of LA at a very specific time. This is a nice element to weave into this documentary.

Yoka does a fine job at laying out a well structured and cohesive narrative utilizing great footage and rare outtakes that never made the air. The interview subjects, especially Zoey and Marika who get so caught up in telling you their story that you cannot help but be spellbound. Both thankfully don't hold back and are able to talk about some deeply painful things but it serves to tell the complete picture.

Whirlybird is a deeply fascinating and engaging documentary that deserves a watch.

Picture/Sound: Whirlybird was shot on high-def cameras and therefore look really nice even on a 720p format. Archival footage is obviously low-def but thats to be expected. The sound is also really well done with a nice DTS 5.1 track. This offers a pretty robust complex track especially on a lower-def offering.