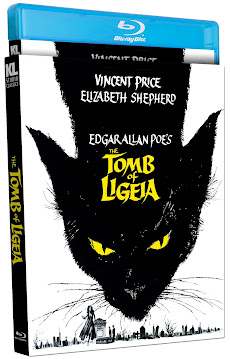 When asked which movie of his own was his favorite, Vincent Price would often reply, The Tomb of Ligeia (1964). Tomb is perhaps one of the more under-loved in the Corman, Price, Poe cycle but one that is excellent. Verden Fell (Vincent Price) is obsessed with this dead wife and cannot let her memory go even when he re-marries. It's not hard to understand why Price and many fans consider this and The Masque of the Red Death to be among his very best from this era. Corman I think was always at his best when he collaborated and his team on Ligeia was incredible.

First off, the screenplay was written by Robert Towne. This was only his second feature screenplay and he adds a lot of depth, dry wit and a tragic gothic sensibility that many other films have tried to copy but few succeeded. Its worth noting that Towne would go onto write classics like 1974's Chinatown (for which he won an Oscar), Shampoo (1975) and the big screen adapt. of  Mission: Impossible (1996) which kicked off a franchise that is still going strong. Towne's script is lean but also allows itself room for character development. And, of course there are plenty of  devilishly fiendish twists-and-turns as well.

Cinematographer Arthur Grant does a fine job at shooting this film. Hammer film fans will no doubt know from his work on such classics as: Cash on Demand, Plague of the Zombies and The Quatermass and the Pit. Grant gives the film a polish with his lens and him along with the production design gives the movie its haunting and black-velvet melancholic worldview. Not to mention the stunning countryside helps give the movie class and production value on a dime-store Corman budget. The cast is excellent with Price giving what is, in my opinion, a career high performance. Price and Corman understood the bleak tone of Poe's work and the performance certainly nails it. Elizabeth Shepard is equally great and she might be my favorite heroine of the Corman/Poe/Price cycle.

Brilliantly written, acted and a fitting end to the Corman/Poe/Price cycle of films. It's very easy to see why this movie is a classic and regarded as the best of Price's films.

Picture: The Tomb of Ligeia looks very solid on 1080p. The overall picture has a nice uptick in color and brightness. These Poe movies have a very stylish hue palate and this transfer does show that off. If I'm being honest I was hoping this would have been a 4k or at least a 2k scan. The image is sharp but it does have artifacts and noise throughout. There are also times when the image has a soft-ish look to it. Insert shots are also rough looking. I dont think its a bad transfer by any means and as I stated above the image does have a nice look, especially the outdoor scenes which look breathtaking.

Sound: The Tomb of Ligeia has a DTS 2.0 track. Dialogue comes through incredibly well as does the score. No issues as far as drop out or unwanted noise.

Extras: Tomb includes a brand new commentary track from Tim Lucas. It also ported over two other commentaries including: Roger Corman track, Elizabeth Shepard track. Also includes a Trailers from Hell w/Joe Dante and various trailers from other Price movie (included this one) released by Kino.