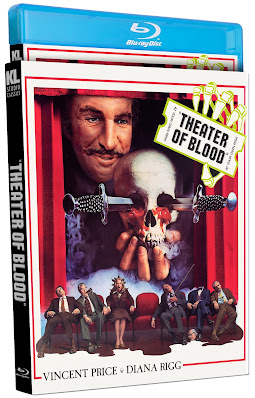 Disclaimer: Kino Studio Classics has provided me with a copy of this film free of charge for the purposes of review. All opinions contained within are my own honest reflections.
Other Vincent Price Reviews:
The Raven HERE
Master of the World HERE
The Last Man on Earth HERE
If you are like me and missed out on the limited edition Theater of Blood (1973) and didn't wanna pay an insane secondary market mark up on eBay, Kino Studio has you covered! A brand-new re-release is out just in time for the spookest time of the year! I included links to the other Price titles I covered. This movie also holds a very special place in my heart as it was among the first Price titles that I discovered, which made me fall madly and deeply in love with the charming actor. A legendary Shakespearian actor named Edward Lionheart (Vincent Price) seeks revenge on theater critics in devilishly absurd ways in this horror comedy outing.
I have to say that Theater of Blood may not be everyone's cup of poison. I admit  am probably bringing nostalgic colored goggles to this review but you know what, thats alright. I think the biggest issue some fans have with this film is the comedy is VERY broad. Moreover, Price is allowed full reign to camp it up. For the record, I never minded when Price gleefully danced into camp. Indeed, I think some roles are actually enhanced by it. This is certainly one of them. Theater of Blood is maybe one of the most overt silly, kitsch Price film this side of The Abominable Doctor Phibes (1971). But, you know what? We get to see Price kill people in wonderfully sadist ways AND watch him play various Shakespearian characters all for the price of admission. Truly, Vincent (who was a classically trained actor) is relishing being able to blend his trademark horror with very old school theater. This also has a dream-cast of amazing British character actors. Included but not limited to: Diana Riggs, Ian Hendry, Robert Horden, Coral Browne (who would marry Vincent Price),  Jack Hawkins, Dennis Price and Joan Hickson.
Screenwriter Anthony Greville-Bell constructs a screenplay is simplistic and allows for a nice clean and wicked revenge plot that mirrors something by Agatha Christie. Bell does strives for and I think succeeds in adding character depth into all this lovely insanity. Price for all his hamming does take Bell's pathos and runs with it. And, by doing so gives the movie a real bloody-beating heart. It also feels like a touching homage to Prices own career much like Madhouse was released a year later in 1974.
Douglas Hickok, probably best remembered for Zulu Dawn (1979) directs this movie with mad-cap style and features some wonderful production design on a dime. Speaking of, the movie is made on a budget and at times it shows. However,  I think Hickok does a fine job at smoothing over some of the rough edges. Theater of Blood is just a purely fun pitch-black comedy horror that has a cast to die for!
Picture: Theater of Blood is been given a very nice looking 1080p release. The overall film is given a nice uptick in brightness and though this isn't a colorful movie hues wise the movie makes the palate sing. I was so pleased to see details like costumes, costume textures, locales and sets have a nice depth and sharpness. Also, very little in the way of artifacts and noise. Grain is present but smoothed out and not chunky or too busy looking. Overall, I have to say this looks like a 2k scan but isn't. Well done!
Sound: Theater of Blood has a DTS 2.0 track. Dialogue comes through nicely without any drop out issues.
Extras: Theater of Blood ports over the commentary by David Del Valle and Nick Redman. Valle and Redman are as always well spoken and well researched. Valle brings his insights into actually knowing and interacting with various cast and crew.
Included is a new commentary from Alan Spencer. Spencer brings a fun, witty and like Valle and Redman, a incredibly well researched track. Well worth listening to. Spencer also is a fun of dad-jokes and word play which I adore. Bravo!
Also includes: A Trailers from Hell w/Alan Spencer, TV Spots, Radio Spots and Trailers.
Posted by The Video Attic at 7:29 AM