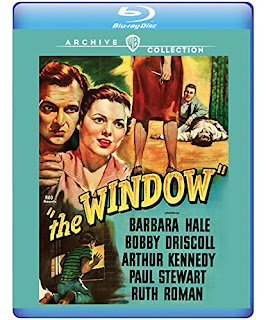 A little eight year old boy named Tommy (Bobby Driscoll) is use to telling tall tales to his friends and family. This sometimes gets him into trouble like almost getting evicted from their apartment. To beat the summer heat one night he decides to sleep out on the fire escape. He witnesses a murder but, of course nobody believes him. Now he is in mortal danger in this underrated thriller. I had seen this movie previously on TCM and thought at the time that it was a pretty interesting little thriller that I had never ever heard of. As you may have gathered from the plot summary this movie plays off the "boy who cried wolf" parable. I think this is a pretty interesting framework. It also up's the tension when a young child is in danger.  The screenplay was helmed by Mel Dinelli, though not a household name, Mel had written some excellent noirs like Beware, My Lovely (1952), House by the River (1950) and probably his most well known film The Spiral Staircase (1946).

Director Ted Tetzlaff was best known for being a cinematographer on such classics as Hitchcock's Notorious (1946), I Married a Witch (1942) and The Talk of the Town (1942). He also dabbled in directing including this film. The movie is certainly well directed and has a visual flourishes that you would expect from a DP. I also think its a gamble move to have a child carrying a lot of the movie. Luckily, I think Bobby Driscoll (most remembered for being the voice of Disney's Peter Pan) is likeable enough and thankfully not overly annoying. The movie is also nicely paced clocking in at a lean 73 minutes. The plot is a bit overly simplistic but I think it does a lot within it and Ted Tetzlaff manages to ratchet up enough tension and suspense to make it enjoyable and engaging. It also feels like a proto-Rear Window which didn't come out until 1954. Taking this a step further this also seems like the blue print for Home Alone (1990).  There are some harrowing moments that I legit found surprising how it pushed the boundaries of a thriller with a child at the center.  Features a nice pulpy score by the legendary Roy Webb (Notorious, Out of the Past).

The Window isn't a well known thriller but I think it should be. It's a creepy, tense-filled movie that is dripping with atmosphere and paced extremely well.

Picture: Once again Warner Archive delivers the goods when it comes to an excellent picture. Here we get a black-and-white picture that has a nice contrast, is crisp and clear with no artifacts or noise present. Small details like costumes, sets and locales really pop and showcases the highly atmospheric visual style. Grain is present but is thankfully smoothed and not distracting.  I couldn't find out if this was a 4k scan but it certainly looks like it. A sharp and wonderful looking presentation.

Sound: The Window has a nice DTS 2.0 track. This has a really big powerful sound in my opinion. It showcases Webb's great score and dialogue comes through nice and strong.