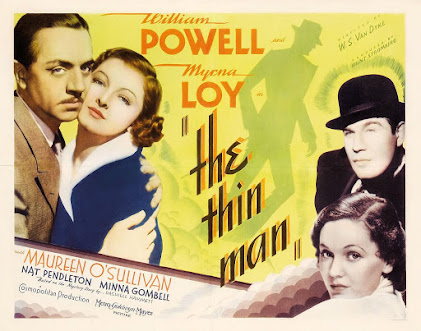 Today most-people, especially the older generation bemoan that the cinema landscape is dominated by a seemingly never ending cycle of sequels. However, one of, if not thee first major film series franchise started with 1934's The Thin Man. This would prove to be so popular that a whooping five more sequels would come. The series ended in 1947 having fizzled out. In my very first Video Attic Retrospective I will be taking a look at the first three Thin Man movies- all of which are now on Blu Ray via Warner Archive. Links to these movies can be found down below. 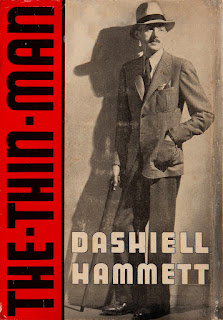 Setting The Stage: Before The Thin Man: They say nothing is created in a vacuum and it took a lot of influences and even a major cultural event to shape and fully form the hit comedy-series. The Thin Man first started life as a pulp-crime novel by Dashiell Hammett. Hammett was regarded as the greatest mystery writer of his generation, having also created the iconic character of Sam Spade for The Maltese Falcon. That would of course also became a famous film starring Bogart. Though the book and movie differ in some regards the characters of Nick and Nora were the same fun-free-spirited heavy drinking couple. The rights to Hammett's book was quickly snapped up and the film version was shot and released in the same year as the novel.

But why was the first film such a big hit, big enough to spawn so many sequels? The key to the films success I think can be summed up for three key reasons.

Great Depression Escapism/Post Prohibition: From 1920 until 1932 it was illegal to sell or import alcohol. What was set in place by good intentions only brought speakeasies and a lot of underworld crime not to mention death due to crudely-made spirits. Finally, it was repealed and America had partied down like never before. Durning this time, the country was also going through a Great-Depression and besides books or plays films were the only way to really escape from life's hardships. After all, home video and even television were many years away and many flocked to their local cinemas.

Nick and Nora: A New Kind of Couple: I don't think it can be overstated that Hammet's fictional creations Nick and Nora Charles were unlike any other couple and, when the film version came out audiences got a taste of them in the flesh. Snappy, witty and dressed to the nine and always carrying a martini or five, Nick and Nora were trend-setters. They weren't blue collar slobs yet they didn't come off as inaccessible to a working class audience.  This proved to be a winning combo and Americans ate up the young dry-witted duo. It was also pretty interesting to see a woman on the big screen with agency of her own.

The Actors: Thirdly, I think that a lot of credit to the films success is due in large part to Myna Loy and William Powell. The pair were both steadily working since the '20s but, its no secret that The Thin Man put them on the road to superstardom. It may be the reason why Loy went onto big and iconic films like The Best Years of Our Lives (1946) and Mr. Blandings Builds His Dreamhouse (1948) and Powell films like My Man Godfrey (1936) and Life With Father (1947). Together they were a power couple, making a whooping 13 films together in their long careers. Though they both made fantastic movies outside of the Thin Man series, it is probably what they are best remembered and beloved for. Loy and Powell bring a special kind of magic to the characters that is really hard to sum up into words. Of course they look the part and speak it but the actors bring a comedic timing and dry-humor and charm that makes them zing!

Of course there are many other aspects of why the first film was a hit and lead to the sequels from the direction, production design, cinematography and basically every aspect in front of and behind the camera. The following is a review of each film.

The original, the one that started it all. The Thin Man is the very prime example of pinpoint direction, lean efficient storytelling coupled with the star power that was Powell and Loy. As mentioned above it cannot be understated just how different Nick and Nora was. This cool fast talking sophisticated couple that that was really unlike any other husband and wife duo seen before in the US. Many people during the Great depression wished that could live the kind of care-free expensive jet-set life of Nick and Nora. But, at the heart of it is a really engaging mystery not to mention a wry sardonic humor and escapist fantasy.

Often considered the best of the sequels, if not slightly better than the first film.  After The Thin Man takes place shortly after the events of the first film. This is set on New Years Eve, hoping to take a much needed break after the previous case. Nora's brother-in-law is murdered leading to a investigation and many, many cocktails. Once again, W.S Dyke's extreme attention to detail and fantastic direction is in full swing as is the staggeringly witty, well paced screenplay by Albert Hackett and Frances Goodrich. To tell you how amazing these guys were, between them they had eight Oscar nominations and a ton of classics to their name such as, Seven Brides for Seven Brothers (1954), In the Good Old Summer Time (1949), Father of the Bride (1950)

Another Thin Man marks a considerable change in the series. Not only does it add a baby named Nickie Jr (William A. Poulsen) but, seeing how Nick and Nora are now parents W.S Dyke toned his screen characters considerably. Long gone are the heavy drinking, free wheeling, free spirited couple. (Though yes, they still drink in this film but not nearly as much) Now, we have parents that are framed in a more mature light. While its nice to see how Nick and Nora evolve I can't help but think that a big part of what made them so special was lost in the process. Not to mention that the baby adds not very much to the plot and very little in growing these two as people. Still, even though martini's are subbed out for diapers Dyke along with Albert Hackett and Frances Goodrich still provide the duo with a sharp as knives dry, sardonic wit. As for the story, it's a fairly engaging mystery with some nice twists and turns.

In part two we will be covering parts 4-6 and talk about the films legacies in film and pop-culture.

All three films are available on Blu Ray

After the Thin Man HERE