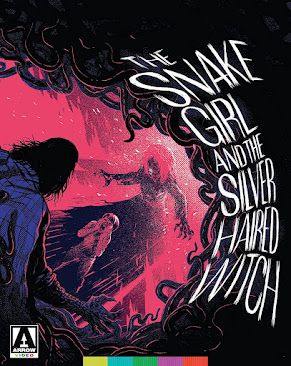 Disclaimer: Arrow Video has provided me with a copy of this film free of charge for the purposes of review. All opinions contained within are my own honest reflections.
1968 was a pretty amazing year for horror. We got classics like Night of the Living Dead, Rosemary's Baby, Hour of the Wolf just to name a few. It was also the year that The Snake & The Silver Haired Witch came out. The film has had a small cult following but, thanks to Arrow Video has slithered its way into a much wider audience. In fact, this is the very first time this movie has been available on home video outside of Japan.
From its delightfully  spooky score and cold open, The Snake & The Silver Haired Witch really sets its tone. Moody and dark but with a playful kitsch side. The movie hooks you from the very first moments and has an increasingly strange plot that keeps you guessing. This mystery helped keep me engaged throughout its brisk 80 minute runtime. Not to mention just how completely bonkers this entire movie is. It really like a wild LSD trip at times. In fact, it reminded me a lot of Hausu (1977) both in its fairytale like quality with its bizarre set-pieces.
The movies plot requires you to suspend a lot of disbelief but I think of this more as a mood-piece that works more on dream logic. And, as I mentioned above there is a sort of fairytale like quality that further reinforces this. The effects can be at times pretty hokey but again, I think this only works with the films kitsch camp value. However, there are some moments that are legit creepy.
If you are looking for a great October watch but with an international flare, The Snake & The Silver Haired Witch is a must-watch!
Picture: Snake is yet another home run for Arrow in terms of a stunning transfer. The movie which is over fifty-years old at this point has been lovingly restored. The black-and-white photography is well balanced in terms of contrast and and, for the most part the movie has been cleaned of artifacts, dirt and noise. There is some of this but honestly, for its age and obscurity thats par for the course.
Sound: Snake has a DTS 2.0 track. The dialogue, score and sound design come through incredibly well with no unwanted background noise or audio drop out issues.
Extras: As always Arrow provides a nice array of extras that add a historical/cultural context to the main feature. Included is a commentary track by David Kalat
This Charming Woman with Zach Davisson (27mins) Scholar Zach Davisson discusses the film and the manga it was based on. A really enjoyable and informative featurette.
and Trailer, Image Galley
Posted by The Video Attic at 9:53 AM