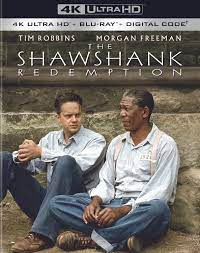 Based on a short story by Stephen King entitled Rita Hayworth and the Shawshank Redemption, the film version, shorted to just The Shawshank Redemption (1994) is considered one the better if not thee best book to screen adaptation of King's prolific output. The movie is so well known that it even feels silly to do a plot summary but, for anyone not familiar, the movie is about a man named  A young banker named Andy (Tim Robbins) who is convicted of murdering his wife. Though he professes his innocence. While in the titular Shawshank prison, Andy meets Ellis 'Red' Redding (Morgan Freeman) a wise older man. The pair form a friendship. Andy forms a plan to escape prison in this classic '90s film.

With a 9.3/10 on IMDB (from over two-million votes) and a 91% RT score (though I cant imagine anyone hating this movie) Shawshank's status of stone-cold classic is well earned. It was a critical and commercial success and earned seven Oscar noms though shockingly won zero. The movie simply put is that rare lightening in a bottle film. Every single element works as precise as Swiss watch, from the amazing direction and screenplay from Frank Darabont to Roger Deakins (Fargo, Blade Runner 2049, 1917) cinematography that is as moving it is iconic. The story is touching, harrowing, dark but also optimistic at the same time. Its message about not being able to kill the human spirit is one that is simply timeless.

Then you have the performances. It baffles me how Morgan Freeman and Tim Robbins did not bring home Oscars for their respective roles. Both actors being a layered, heartbreaking turn and further cemented them as legends in the field of acting. The supporting cast is also excellent with William Sadler, Bob Gunton and James Whitmore just to name a few. Frank Darabont would go onto adapt another prison King story The Green Mile (1999) which is also great but, just narrowly falls short of  re-capturing that magic that Shawshank did.

Picture: If ever there was a film fans wanted on UHD it certainly would be Shawshank. I'm happy to report that this looks fantastic. The balance of color presented here truly, in my opinion showcases Deakins moody style and masterful style. The film has a slightly somber palate with purposeful pops of color. This transfer thankfully doesn't look overly processed, nor does it have a bland look. Skin tones have a nice fresh natural look as well. Of course the film has no grain nor any artifacts, noise. What we are left with is a nice pristine looking print that has a sharp high quality look to it.

Sound: Shawshank has  DTS 5.1 track. Sadly this doesn't have an Atmos track but I still think it packs a powerful punch in terms of a complex sound design. On a surround system the film offers a dynamic range not to mention how well the dialogue and sweeping score comes through.

Extras: Shawshank extras include: UHD: A commentary from Frank Darabont